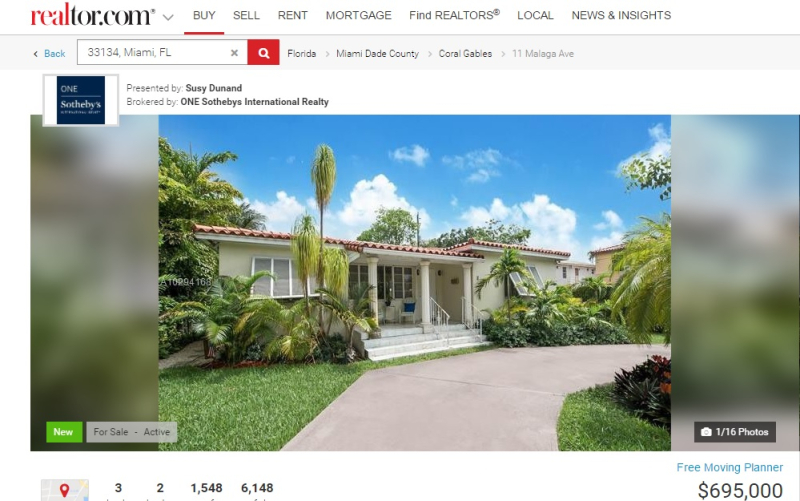 State Rep. Daisy Baez listed her Coral Gables home for sale Wednesday, about a month after her compliance with a Florida constitutional requirement that she live in her district was called into question.

Realtor.com shows Baez's three-bedroom, two-bathroom Malaga Avenue house for sale for $695,000. The property is in House District 112 -- which is a problem for the freshman Democratic lawmaker because she represents District 114 and was supposed to have lived there by Election Day last November.

When the Miami Herald first reported in May that Baez was apparently still living on Malaga Avenue, Baez said she kept two residences: the house and a rental in District 114. That address was an occupied apartment owned by a pair of her campaign donors. Baez's friends later said she was renting another property in the district and planning to move out of Malaga Avenue. A "For Rent" sign went up on her yard.

Baez, who dropped out of a Florida Senate race after news of her residency problem broke, was hit with an ethics complaint over the issue earlier this month.

"I currently live in the district I represent and right now my focus is on the special session and my continued efforts to push for more responsibility and transparency when handling our tax dollars, to protect our public schools and the environment and to bring better paying jobs to the district," Baez said in a statement to the Herald at the time.

Posted by Patricia Mazzei on Thursday, Jun. 15, 2017 at 5:00 AM in Miami-Dade Legislators, Miami-Dade Politics | Permalink