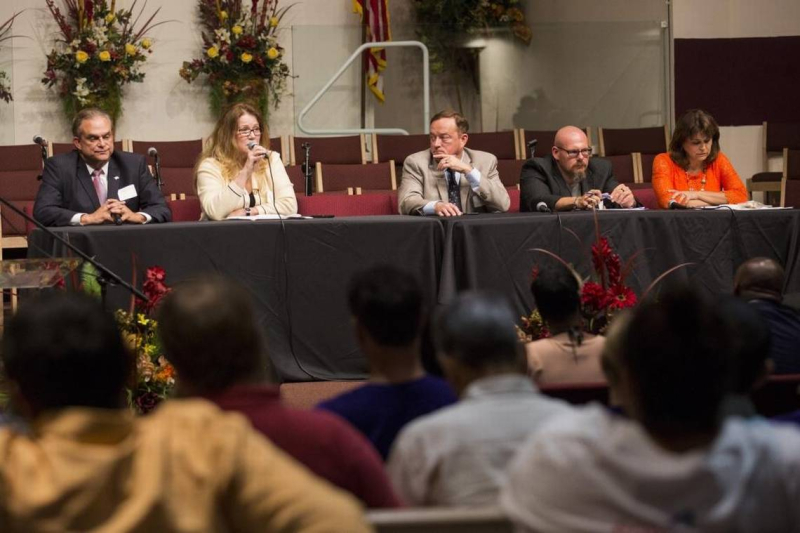 With two big-name Republicans a no-show, the rest of the field vying for the Florida Senate seat left vacant by Republican Frank Artiles when he suddenly resigned in April pounced on the opportunity to speak directly to voters at a candidate forum Thursday night, the first in the special election race.

Wylamerle Marshall, 89, said their absences proved to her they were not committed to serving her district, District 40 in Southwest Miami-Dade.

“Their not being involved in the process tells me they are not that interested in the position that they are running for,” she said. “I would not waste my time with them.”

But he struggled to get his footing, with the more liberal candidates receiving the majority of the applause as they condemned attacks on the Affordable Care Act and President Donald Trump's decision on Thursday to pull the U.S. from the Paris climate accord — both federal issues unrelated to the state Legislature.

On the climate accord decision, Palomares referred to global warming as a theory that could have harmful impacts, depending on if you believe in it or not.

“It's a concept,” he said, to confused looks from some audience members.

He said the accord was a contract made in “good faith,” and that it was unenforceable.

“It's real, it's happening,” said Smith, a first-time candidate and founder of a tech consulting company. “We are at ground zero in South Florida.”

Taddeo, a translation business owner who has suffered several political defeats in recent years, said she was “”absolutely devastated” and embarrassed to hear of Trump's plan.

“I cannot believe, in this community specifically, that the United States of America has joined Syria and Nicaragua — those are the only two countries that have not joined in the Paris accord,” she said. “We are living climate change.”

Candidates from all sides came to a consensus against state House Bill 7069, a controversial education bill that will allow charter schools to share tax dollars with public schools. They also agreed that the Affordable Care Act was in need of reform, although Palomares was far more critical of the federal legislation than his counterparts.

In the end, each candidate made their case as to why they deserved former Artiles' seat, one he left vacant after resigning in April following offensive remarks he made to two senators.

Palomares flaunted his record as a civil-rights attorney; Smith touted his experience in the tech industry, and Taddeo noted her commitment to the African-American community. Rivas Logan, a teacher of nearly 30 years at Robert Morgan Educational Center, and Schlaerth, an adjunct professor at a handful of local colleges, talked up their experience with the education system.