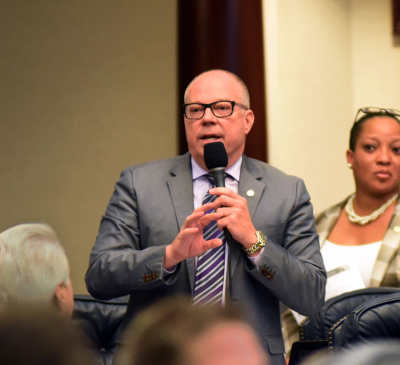 State Rep. David Richardson, the Miami Beach Democrat and retired forensic auditor who has used his expertise to uncover financial abuse in the state prison system, will run for Congress in the Miami-based seat being vacated by U.S. Rep.Ileana Ros-Lehtinen who announced her retirement last month.

"I'm ready for it,'' Richardson said in an exclusive interview with the Herald/Times Tallahassee bureau. "The most important thing is that anyone working Washington has got to work in a bi-partisan way and, for the last five years, I've demonstrated I've been able to get things done in the minority."

Richardson, 60, entered a race that is already crowded with both Democrats and Republicans. He was first elected to the House In 2012. He starts with a strong base as his Democratic state House district is enclosed entirely within Congressional District 27, is 60 percent Hispanic and leans Democratic.

"Ileana Ros-Lehtinen because of her tenure has been amazing and exceptional with constituent services,'' he said. "I really believe she could have won in 2018."

Richardson said he has been considered a run for Congress for some time but expected Ros-Lehtinen to retire in 2020. Her unexpected announcement that she will retire in 2018 after 35 years in office, accelerated his timeline.

Miami businessman Scott Fuhrman, the first Democrat to announce a challenge to Ros-Lehtinen before her resignated, announced Tuesday that he’s suspending his campaign. Richardson, who is spending Tuesday in D.C. meeting with pollsters and party strategists, said he has hired Eric Johnson, who managed Fuhrman's campaign, to be his campaign consultant.

"I've been looking at the seat for a couple of years but had decided I wasn't going to run against her,'' he said. "It's not going to be a cakewalk. I've spent a lot of time studying the race and weighing my options. I think this is the best way to serve folks in the State of Florida right now."

Richardson ran for office after he retired as a forensic auditor. Drawing on a 30-year career unraveling corporate corruption and financial malfeasance, he turned his expertise into examining the financial records, policies and allegations of abuse in the state's troubled corrections system.

He investigated brutal “test of heart” hazing rituals used by prison gangs to extort money from young newcomers in return for protection and forced policy changes. He has learned how gangs avoid corrections officers, create lookouts and decoys, and rely on poorly designed prison spaces to exploit blind spots and prey on their victims.

He uncovered what he considers “ground zero for officer-on-inmate violence” at Sumter Correctional Institution. He dug out details about how new arrivals were routinely “punched, or choked, or hit or slapped by an officer” as they arrived on the prison bus, validating reports that elements of the state’s prison culture were failing to police their own.

In the last year, he spent more than 700 hours interviewing 300 inmates at dozens of facilities across the state, Richardson discovered that the bifurcated oversight worked to the advantage of the private prison companies and to the disadvantage of taxpayers.

And he has forced two investigations in Gadsden Correctional, where he discovered women housed lived for months without hot water or heat, faced flooded bathrooms daily and endured water rations when the septic tanks were jammed with food waste.

"I can't wait to get started looking at the federal prisons,'' Richardson said.