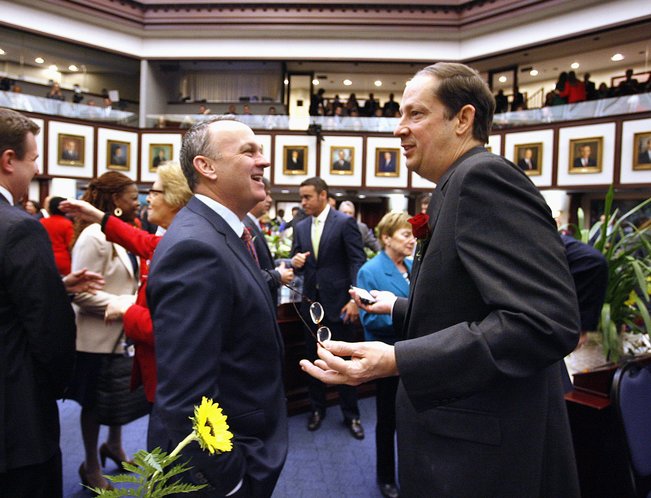 Facing a 6 p.m. deadline, Florida legislative leaders struck a last-minute agreement with the governor to resolve their differences and avoid an embarrassing override of the governor's budget vetoes Friday.

House Speaker Richard Corcoran, R-Land O’Lakes, and Senate President Joe Negron, R-Stuart, agreed to the Senate's demand that they to restore $60 million of the $114 million cut from higher education projects, $215 million into K-12 education, and pass the House's version of an economic development bill that restores $75 million to Visit Florida and creates a new economic development grant fund of $85 million.

But, in a surprise move, lawmakers also agreed to add $50 million to pay for repairs the the Herbert Hoover dike, a small contribution to a $2 billion federal government project that is scheduled for completion in 2025.

The governor then issued a proclamation to add the dike and higher education to the session. The dike project was initially sought by Gov. Rick Scott when he agreed to back a bill sought by Negron to build a water storage reservoir near Lake Okeechobee to avoid another year of toxic algae discharges into nearby estuaries.

The Senate agreed to pass the House economic bill 1-A by a vote of 34-2, restoring the $160 million and adding a new provision that allows small county tourism organizations to use local bed tax revenue as matching money to draw state tourism dollars.

The deal, negotiated behind closed doors, ground the session to a standstill as staff worked to draft the language but it also avoided an override of 15 higher education projects, which Negron insisted was necessary in order for the House and govenror to get their priorities.

The special session, called by Scott a week ago, nearly collapsed Thursday night after Negron lashed out at what he called a "fake narrative" that he had reneged on a deal with Corcoran and Scott.

Corcoran, who refused to go along with the Senate’s plan to override Scott’s vetoes of college and university construction projects, instead agreed to shave off a portion of each of the projects and revive them in another spending bill.

They include new renovations and programs at Miami-Dade College, the University of Florida, Florida International University, Florida State and other institutions will be part of a bill that Scott is eager to sign that also restores the budget of VISIT Florida at $76 million and creates a new $85 million infrastructure fund.