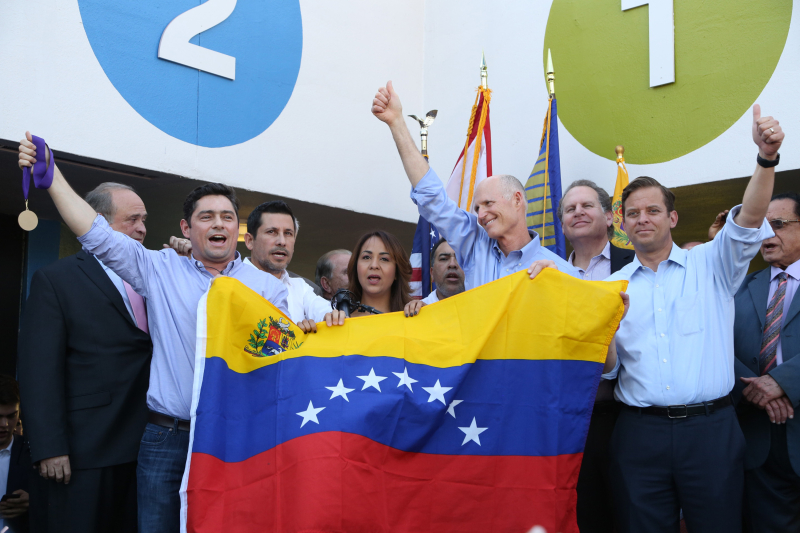 He then compared the Maduro regime to Cuba while criticizing Barack Obama's move to open up relations during the final stretch of his administration.

"The turmoil in Venezuela is eerily similar to events that have plagued the island nation of Cuba for decades. When President Obama moved to normalize relations with the Castro dictatorship many argued that the new relationship would be the beginning of a better life for the Cuban people. Yet two and half years later, repression is growing and the brutal crackdown of the peaceful opposition movement is most alarming."

Read the full text of the op-ed below:

U.S. Must Take Stand Against Cuba and Venezuela

In recent months, we have seen Venezuela slip into complete chaos. Under the brutal and oppressive dictatorship of Nicolas Maduro, we have seen things go from bad to worse. Food and medicine shortages, violence on the streets and economic uncertainty.

We've also seen companies like General Motors, Bridgestone and General Mills scale back their operations in Venezuela. Recently, United Airlines also joined in this effort by announcing it will suspend flights to Venezuela next month.

It's no wonder that these companies are pulling out of a country engulfed in violent political protests and economic chaos.

Venezuelans endure long lines to purchase basic necessities all while Maduro's dictatorship blames companies for the country’s shortages. The Maduro regime continues to mismanage the country's oil resources, has produced a swollen inflation rate and dismal exchange rate, leaving the Venezuelan people to deal with hardship and corruption.

This is not acceptable and we should not stand for these injustices to the Venezuelan people. The United States must stop doing business with Venezuela immediately.

The turmoil in Venezuela is eerily similar to events that have plagued the island nation of Cuba for decades. When President Obama moved to normalize relations with the Castro dictatorship many argued that the new relationship would be the beginning of a better life for the Cuban people. Yet two and half years later, repression is growing and the brutal crackdown of the peaceful opposition movement is most alarming.

This was the wrong move. A message must be sent to both the Maduro and Castro regimes and their gangs of thugs that the United States will not tolerate their continued aggressions.

Organizations like the Ladies in White and UNPACU are the constant targets of the Castro regime's violent rage. The anticipated "emerging private sector" (cuentapropistas) has actually decreased and tens of thousands of Cubans have attempted to flee the enslaved island in numbers not seen since 1994. In Venezuela, the Castro dictatorship continues to pull the strings, aiding the Maduro government's bloodbath against the heroic Venezuelan people.

Moreover, the Obama-Castro deal failed to prioritize America's interests. It purposely did not contemplate the certified claims of American citizens whose properties were stolen by Castro's regime; it allowed Cuba's trafficking of 240 tons of missile technology and other heavy weaponry with North Korea, and those responsible for it, to get away without consequence; it allowed companies to put American workers at a competitive disadvantage through deals with Cuba's state-owned entities, which employ forced and exploitative labor practices that are contrary to international norms; it ignored judicial claims of American victims of terrorism by Castro's regime and the cries for justice from American families whose killers are being harbored by Castro's regime. To add insult to injury, President Obama even commuted the life sentence of a Cuban spy that was convicted of conspiracy in the murder of three American citizens.

The approach for the new United States-Cuba policy should be a substantive shift. The current direction has proven to provide the Cuban military and state security the resources that will enable them to transfer power from one family member to another. The new course must be focused on doing our part so that the Cuban people may regain their right to self-determination.

Today, I am encouraging President Trump to take a stand against these brutal dictatorships. President Trump and his Administration have the opportunity to set a new course. One that recognizes that the Cuban and Venezuelan people deserve to be free, and prioritizes human rights, democracy, security and the rule of law. This new course should serve as a beacon of hope for those brave activists in Cuba and Venezuela by making it clear that, if you are a Castro or Maduro government official involved in the violation of human rights, you will be prohibited from obtaining any immigrant or non-immigrant visa to the United States. I'm convinced that this new direction will better serve U.S. interests, generate genuine economic prosperity and help the Cuban and Venezuelan people achieve their long-awaited freedom.