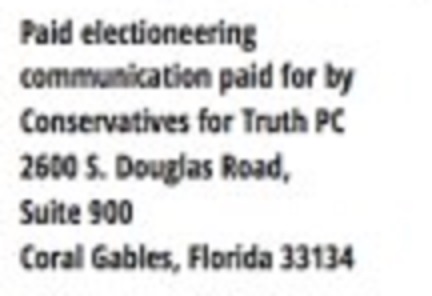 Florida's porous campaign disclosure laws don't make it easy to peg responsibility when someone launches a critical mailer in a hotly contested race, but in the special election to replace Republican Rep. Jose Felix Diaz in House District 116, the latest missive is the work of some members of the Corcoran leadership circle in the Florida House.

The mailer by Conservative for Truth PC accuses Republican candidate Jose Miguel Mallea of "raising taxes" because he worked as a staffer for two years with former Miami Mayor Manny Diaz.

The Florida Division of Elections received the paperwork for Conservatives for Truth on Friday. DOE posted them to the state web site today, after an inquiry from the Herald/Times.

Diaz, a Miami Republican, resigned effective Sept. 26 to run for the special election in Senate District 40 to replace Sen. Frank Artiles, who resigned amid scandal earlier this year.

Mallea faces Daniel Anthony Perez, a 29-year-old lawyer, who appears to have the support of the Corcoran/Trujillo contingent in the House.

Rep. Jose Oliva, the Miami Republican and incoming House speaker who is in charge of re-election Republicans in the next election cycle, has not endorsed in the race and told the Herald/Times he will not take sides. "I'm okay with serving with either of these guys,'' he said. "It's not my role to get involved."

Diaz has also not endorsed in the race.

Although Perez does not have a political committee, he does appear to be benefitting from the committees of his allies. Riesco is not only the registered agent for Conservatives for Truth (and Conservatives for Truth PC), which financed the attack mailer, he is also the registered agent for the political committees run on behalf of Diaz, Reps. Jose Oliva, Jeanette Nunez, Bryan Avila, Manny Diaz, Jr., and Rene Garcia.

Miami Rep. Carlos Trujillo has endorsed Perez but the extent to which he is steering money through his PC is not yet clear. On May 20, Trujillo's political committee gave $10,000 to Rep. Michael Bileca's political committee, which four days later paid The StoneRidge Group out of Alpharetta, Ga., $16,715 for direct mail.

If Riesco's Conservatives for Truth had any part of this, we won't know until they are required to file their first report on July 10 -- just days before the July 25 primary. He could not be reached for comment. 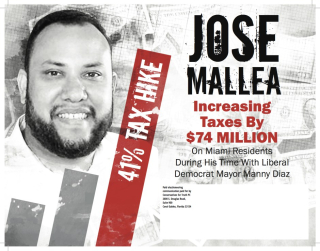 Perez has drawn criticism from Mallea after the Miami Herald reported that Perez had taken his wedding engagement photos in Havana earlier this year.

Here's the comment on the attack ad from Mallea campaign spokesman Brett Doster:

"Daniel Perez lied about his tourist trip to Cuba and he lied about Jose's Cuban heritage so it's no surprise that he's lying about Jose's record. This new desperate smear is the definition of fake news. We're confident that the residents of District 116 will dismiss the false claims of a man who spends his free time partying in Havana under the oppressive Castro regime."