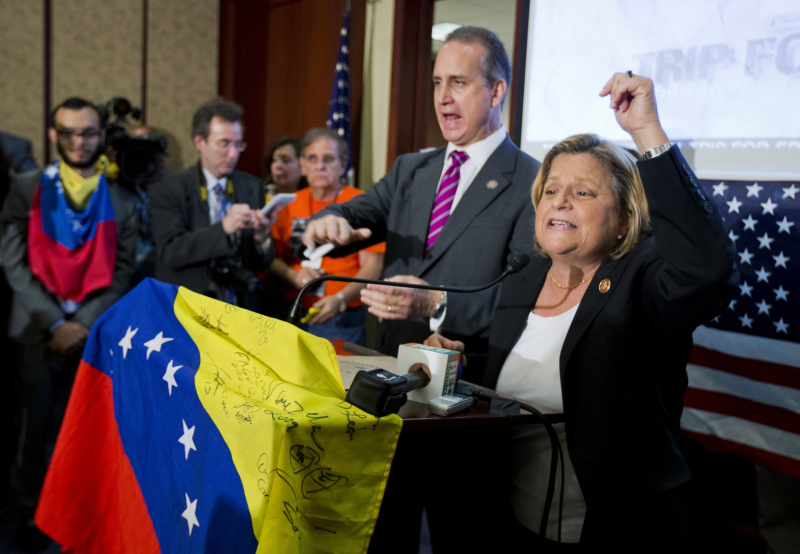 Republican Rep. Ileana Ros-Lehtinen took to the House floor on Wednesday to blast Goldman Sachs' recent purchase of $2.8 billion in Venezuelan oil bonds, which hands the socialist government a financial lifeline amid widespread protests and hunger in the South American country.

"Goldman Sachs is also adding to the people's misery," Ros-Lehtinen said in a floor speech on Wednesday. "Last week, the investment bank bought $2.8 billion in Venezuelan bonds, not only providing the Maduro regime a lifeline in the short term but saddling the Venezuelan people with crippling debt repayments in the long term. When, not if, a democratically elected president comes to the Venezuelan people they will be stuck with the bill and the responsibility to pay for this debt."

Goldman Sachs, a New York-based investment bank, bought the bonds for 31 cents on the dollar, according to the Wall Street Journal, meaning the bank stands to make a tidy profit when Venezuela starts paying its debt.

"With so many Venezuelans lacking the basic goods, including food, many have taken to calling these bonds 'hunger bonds' as the regime lines its own pockets and the Venezuelan people continue to suffer," Ros-Lehtinen said. "Venezuela's pervasive corruption means any infusion of cash, like Goldman Sachs, will not benefit the people of Venezuela who desperately need it. Instead, Maduro and his thugs fill their coffers and use the cash to abuse the Venezuelan people and use it to stay in power."

Ros-Lehtinen, a longtime Miami Republican who recently announced that she's leaving Congress, is a longtime critic of the Maduro regime. The recent news of Goldman Sachs' bond purchase spawned protests and outrage among Venezuelan activists.

During her speech, Ros-Lehtinen also criticized Maduro's involvement in writing a new constitution in Venezuela, arguing that the president is strong-arming the democratically elected legislature.

"Peaceful protests have led Venezuelan strongman Nicholas Maduro to issue a decree to convene a constitutional national assembly in order to rewrite the Venezuelan constitution," Ros-Lehtinen said. "Maduro is once again trying to delay the inevitable: free, fair, transparent and democratic elections in Venezuela."

South Florida is home to the highest concentration of Venezuelans in the United States, and local politicians have increasingly railed against Maduro's regime in recent months.

"U.S. businesses should be avoiding deals with Maduro like the plague," Ros-Lehtinen said.