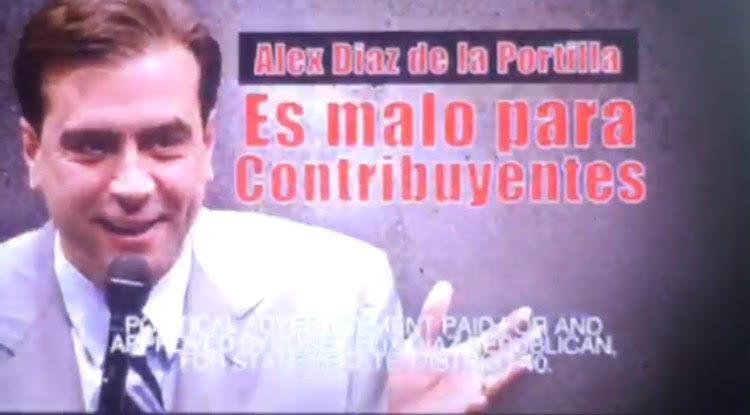 Diaz de la Portilla, a former lawmaker of more than two decades, is “bad for constituents,” the narrator says to begin the 30-second attack ad, the first in the race.

The ad, which claims Diaz de la Portilla is facing foreclosure and that he supported tax increases and new taxes while in office, is part of a quarter-million-dollar TV campaign paid for by Rebuild Florida, Diaz's political committee, POLITICO Florida first reported. The committee shelled out $260,000 in the past two weeks to a consulting firm run by Diaz's political consultant David Custin, according to the committee's most recent expenditure filings.

“At the expense of middle-class families, he voted to impose more than $2 million in new taxes and rates,” the ad says. “He supported the implementation of higher property taxes and raised taxes on small businesses. We can’t count on [Diaz] de la Portilla.”

According to Diaz's campaign, the ad refers to five Senate and House bills Diaz de la Portilla voted “yes” on, which increased license taxes for saltwater products dealers, fees for some certificates of titles and fees for some resident and non-resident hunting and fishing licenses, among other provisions.

Custin said the tax and fee increases added up to about $2 million. Diaz de la Portilla called the accusations “outright lies" in a text message.

Diaz de la Portilla claimed he cut taxes by $20.3 billion during his time in the legislature, citing data from the Florida Office of Demographic Research, which releases annual revenue reports, and state budgets he said he supported. He did not specify how he came up with that figure, nor did he provide specific tax-cutting legislation he backed, saying he didn’t “have time to respond to dirty campaigns.”

The Miami-Dade elections department will begin sending mail-in ballots Tuesday, which is why candidates are ramping up their media campaigns. Diaz de la Portilla, however, said he would not run any television ads, citing financial restraints. Diaz de la Portilla reported having $72,500 on hand in his most recent campaign-finance report. Diaz reported $279,182. Rebuild Florida also has $825,654 in its coffers.

A special election was called to fill the vacant District 40 seat following the resignation of former Sen. Frank Artiles. The primary will take place July 25, followed by a general election on Sept. 26.