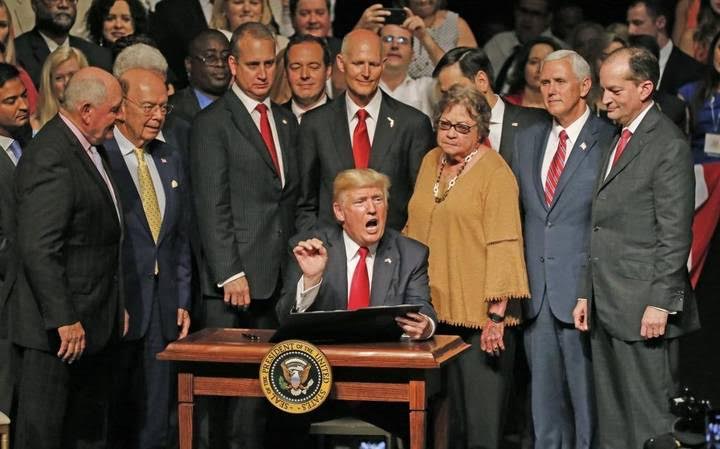 On Friday, President Trump loved them back, enacting a tougher policy toward Cuba as he basked in celebratory cheers that recalled his campaign rallies.

Casting it as a “great day” for the people of the communist island of Cuba, Trump powered into Miami and announced a sweeping change in diplomatic relations intended to rebuke his predecessor’s executive changes and spur commerce and personal freedoms. Criticizing Barack Obama’s “terrible and misguided deal with the Castro regime,” he promised a brighter future during a relaxed 38-minute speech and signed a new executive policy he said would hold the island’s leaders accountable for human rights violations and push them to open up economic and personal freedoms.

“We will not be silent in the face of communist oppression any longer,” he said.

Forget the investigations into whether his staff colluded with Russia and whether he obstructed justice by firing FBI Director James Comey, as Trump himself confirmed in a tweet Friday morning. Friday afternoon in East Little Havana offered Trump his favorite part of politics: praise from people who feel his promise has been kept.

“Last year I promised to be a voice against oppression ... and a voice for the freedom of the Cuban people,” he said. “You heard that pledge. You exercised the right you have to vote. You went out and voted and here I am like I promised.”

He stepped away from the lectern to a side table, picked up a pen and signed the policy with a flourish.