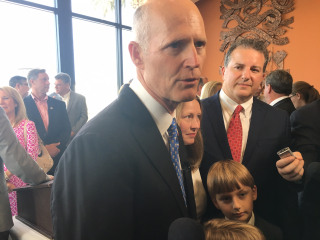 PANAMA CITY -- Gov. Rick Scott on Monday appointed a long-time friend and political supporter, Jimmy Patronis, to replace Jeff Atwater as Florida's next chief financial officer, making him one of three members of the Cabinet that sets state policy on a wide range of issues.

Scott made the announcement before a crowd of about 100 family friends and local business and political leaders at Captain Anderson's, a prominent local seafood restaurant run by the Patronis family that's marking its 50th anniversary this year.

With his wife Katie and their two young sons alongside, Patronis choked up several times as he faced TV cameras. He called Scott "my friend and my mentor" and said the governor's record of improving Florida's economy has been "revolutionary."

Patronis sidestepped questions about whether he plans to seek a full four-year term in 2018, when Scott is widely expected to challenge three-term Democratic U.S. Sen. Bill Nelson.

"There will be plenty of time to talk about it. I've got a lot to get up to speed on with the CFO's office," he said. "We'll talk about it with my family ... This is a family decision."

Patronis told reporters he did not actively seek the appointment and that the first time Scott contacted him about it was in a Sunday afternoon phone call.

Patronis, 45, a Panama City native, has a political science degree from Florida State and served as a Republican state House member from 2006 to 2014.

Scott appointed him last year to the Public Service Commission, the state board that regulates utilities, and to the Constitution Revision Commission in March. Patronis resigned both of those prestigious positions, giving Scott the luxury of making two new appointments.

Patronis will be the first Cabinet member from Northwest Florida since Bob Milligan, also from Panama City, was elected in 1994 to the then-Cabinet post of comptroller. Florida voters in 1998 shrank the Cabinet from six to three members, and the offices of comptroller and treasurer were merged into the position of chief financial officer beginning in 2002.