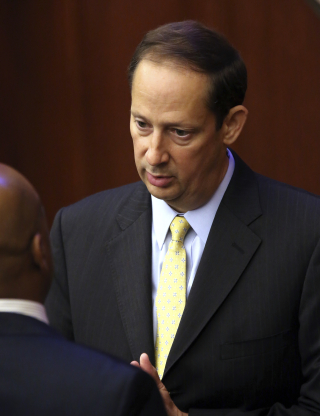 Senate President Joe Negron is back at work in the private sector as of Wednesday, when he returned to a West Palm Beach law firm he previously worked for seven years ago.

“Joe is widely-known by both the bench and the bar as a compelling advocate who skillfully represents businesses and directors in complex commercial disputes. He brings important investigative and trial experience to our clients,” Lawrence Rochefort, the head of Akerman’s Litigation Practice Group, said in the announcement. “His strong reputation and track record make him a powerful addition to our trial team.”

Negron, R-Stuart, previously worked for Akerman from 2005 to 2010. He had left the firm to join another West Palm Beach-based practice, Gunster.

It was from Gunster that Negron resigned in January out of an “abundance of caution to avoid even the possible appearance of” a conflict of interest with his legislative duties.

When asked Wednesday how that concern of a conflict of interest had been resolved, he told the Herald/Times his resignation in January “was a unique set of circumstances related to one particular issue, Senate Bill 10.”

SB 10 — one of Negron’s main priorities during the 2017, which Gov. Rick Scott signed into law last month — calls for building a 78 billion gallon reservoir south of Lake Okeechobee in an effort to improve Everglades restoration. One of Gunster’s major clients, U.S. Sugar Corp., opposed the land buy required for the additional water storage.

Like Gunster, Akerman represents high-profile clients with business before the Florida Legislature, and the firm also advertises “Florida legislative and executive lobbying“ as among its services.

Negron emphasized that Florida’s part-time Legislature is a “citizen legislature where people from all walks of life, business and industry serve the people.”

“Like all elected officials, legislators continue to work in the communities they serve,” he said. “There are very clear guidelines and ethical rules that relate to all members of the Legislature, and I will certainly adhere to those.”

Negron said he’ll practice business law and commercial litigation at Akerman, a firm that he noted has a “national platform.” He said Wednesday was his first day of work and he’ll be based out of the West Palm Beach office.

At least one other influential lawmaker works for Akerman: Miami Republican Rep. Jose Felix Diaz, who is running in a special election this year to fill the District 40 Florida Senate left vacant when Republican Frank Artiles resigned this spring.