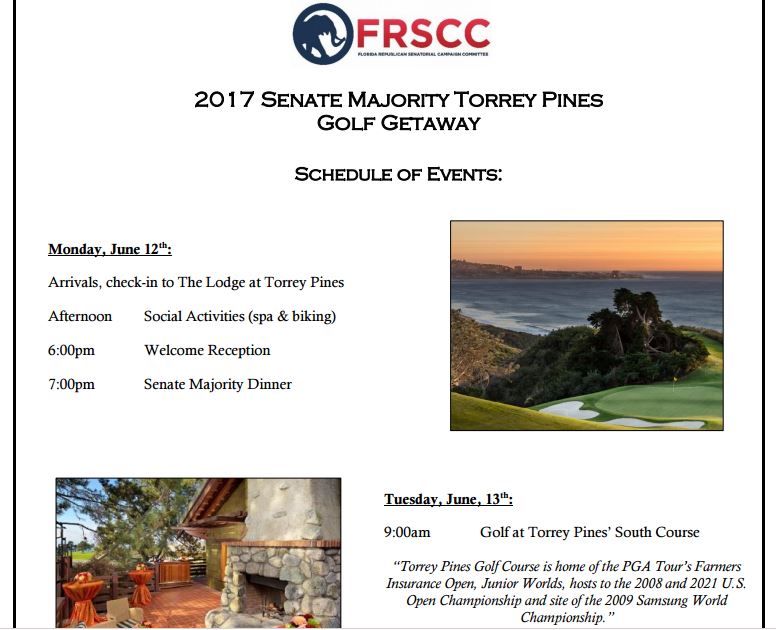 With the Senate insisting that any budget agreement follow the 72-hour cooling off period, the Florida House Republican leadership on Wednesday agreed to go along, even though they read the constitutional waiting period as not applying to the budget bills they will be passing this session.

So what are House leaders asking for in return?

Nothing more than telling the Senate it wants them to come back to finish their work on Tuesday, June 13 -- same day the Florida Republican Senatorial Campaign Committee has scheduled its annual golf fundraiser in California.

The traditional golf fundraiser, often held at the prestigious Pebble Beach golf course, has been moved this year to Torrey Pines, the swanky municipal course situated along the cliffs of San Diego that is also on the  PGA tour. The bad news for Senate Republicans is that the fundraiser is scheduled for June 12-13.

Sen. Rob Bradley, R-Fleming Island, said the fundraiser should have no impact on the special session.

"I have a plane ticket to go to California this weekend, but it's not going to impact any decisions we make here,'' he said, shortly before the Senate was to convene.

According to the invitation, the event begins with spas and biking in the afternoon on Monday. Then a reception and the Senate Majority Dinner. On Tuesday, the day is devoted to golf at the "home of the PGA Tour’s Farmers Insurance Open, Junior Worlds, hosts to the 2008 and 2021 U.S. Open Championship and site of the 2009 Samsung World Championship.”

Other optional events for this trip, the expenses for which are paid by political committees, include visits to the Torrey Pines State Natural Reserve, Evans Garage antique car museum, a tour of the aircraft carrier Midway, sea kayaking and snorkeling or a California wine tour.

The Senate disagrees. In a memo to Senators on Tuesday, Latvala wrote:

"President Negron and I have reviewed relevant legal precedent and accepted the advice of our Senate Professional Staff regarding the application of the 72-hour cooling off period as it relates to this legislation. Out of an abundance of caution, the Senate will allow SB 2500A and SB 2502A to rest in final form for 72 hours prior to a vote. For this reason, the Secretary has distributed the filed versions to each member of the Legislature, the Governor, the Chief Justice of the Supreme Court, and each member of the Cabinet. If amendments are adopted in Committee or on the Floor, the Secretary will issue a new distribution indicating the start of a new 72-hour cooling off period."