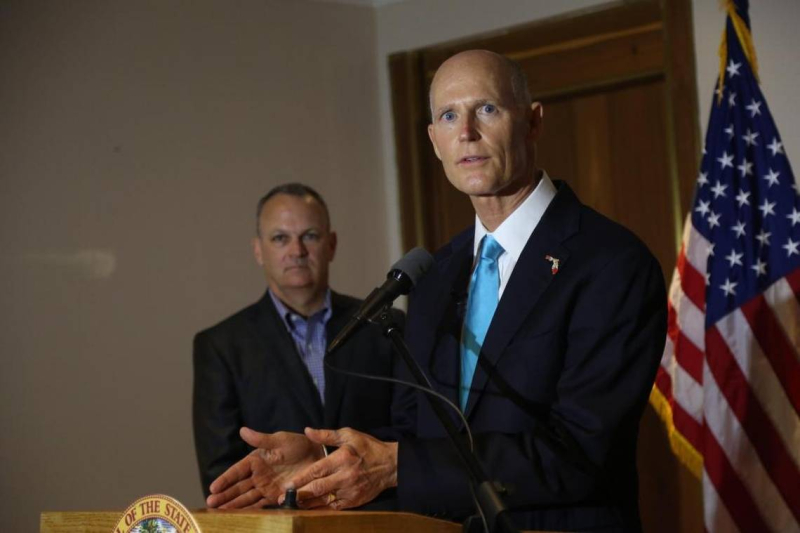 Does $85 million directed to a new economic grant program qualify as a slush fund for the governor?

The head of the agency that will manage the newly-developed grant fund, the Department of Economic Opportunity Secretary Cissy Proctor, wouldn't embrace the loaded language but, in meetings before the Senate Appropriations Committee on Wednesday she didn't correct legislators who said the money gives the governor unfettered ability to steer money to hand-picked programs without transparency.

"Sometimes we take different paths to get to the goal,'' she said, when asked how the program morphed from incentives to grants. She rejected claims that the program offers no transparency.

Also taking different paths are the House and the Senate which are poised to pass different approaches to how far much oversight to impose on the governor, a rift that needs to be resolved before session ends on Friday. Each chamber gave their respective proposals preliminary approval on Thursday.

The legislation is a priority for Gov. Rick Scott, who called lawmakers into special session and, after conversations with the Senate president and House speaker, asked them to pass legislation to restore $75 million in Visit Florida, the state's tourism marketing agency, and create the $85 million grant fund managed by the Department of Economic Opportunity and controlled by the governor.

"This is obviously the main reason we are back here,'' said Sen. Jack Latvala, R-Clearwater, the Senate Appropriations Committee chair in opening debate on the measures on Thursday.

Under the proposals, the state will no longer use taxpayer money to attract specific companies to Florida. Instead, the newly-created Florida Jobs Growth Grant Fund, a creation of House Speaker Richard Corcoran, gives the governor power to approve state and local infrastructure projects that diversify the economy or target specific areas, but money can't be steered to specific companies.

Although both the House and Senate establish a new framework for the grant fund, only the Senate imposes restrictions on the governor's latitude.

"We've heard a lot of about accountability about Enterprise Florida and Visit Florida from the House of Representatives in the last several months,'' Latvala said as the full Senate adopted the amendments. "The bill that they're passing creates this grant program with virtually not accountability in them. This structure is a good structure."

"We're giving a fund for the governor to do across the board infrastructure in the state of Florida,'' he said. The oversight exists because the governor is elected, he said. "But they're broad-based benefits to the entire state."

He compared the grants to  special projects sought by legislators that impose few hurdles, audits or applications.

"It was just a line-item in the budget that went to an entity with zero oversight,'' he said. "Now we we can do that but the governor can't do that with projects he thinks are beneficial?"

But Latvala was adamant that the Senate approach supports more transparency.

"The way the House bill is written, an individual citizen, a campaign contributor, could call up the governor's office and ask him for this project and there is no due diligence anywhere, and the governor could approve it. Yes or no?'' Latvala asked Proctor during a meeting of Senate Appropriations Committee on Wednesday.

Proctor didn't deny it but said "the process is set up to allow projects to come in from many different sources."

To underscore that oversight, the Senate on Thursday adopted a series of amendments to the economic development bill, by Latvala, Sen. Audrey Gibbons, D-Jacksonville Sen. Jeff Brandes, R-St. Petersburg, that expand the list of entities eligible to receive grant funding.

Among the changes, they require that the grants have a positive economic benefit, supported by the local community and abide by performance metrics established by the department.

Brandes' proposal also requires that any project valued at more than $2 million must get approval from the Legislative Budget Commission and sunsets the program on June 30, 2019.

Without the amendment, Brandes argued, "it's virtually a blank check with no accountability."

Gibbons' amendment would require Visit Florida and Enterprise Florida, the state's economic development agency, to post on their websites on all proposals and applications for grants, including scoring criteria the amount of the award, project start and completion dates, and the final contract and agreement.

The Senate prohibits grants from going to retail businesses to reimburse them for trainee wages, it allows certain non-profits -- such as libraries,, correctional facilities, state colleges and technical centers -- to apply for the workforce training grants as long as all expenses are documented.

In the House, Rep. Paul Renner, R-Palm Coast defended the House's economic development bill, HB1A, against complaints from Democrats that the money allows the governor and his staff control over spending without legislative oversight.

He said the program takes money out of the hands of unelected officials at Enterprise Florida and puts it "where the buck stops."

"Only we in the Legislature appropriate money and the governor is involved in spending and in doing so we offer some level of discretion,'' he said.

Rep. Joe Geller, D-Aventura, called it a "slush fund" that qualifies as "corporate welfare" because it allows the money to benefit a private corporation if the governor chooses.

Rep. Nick Duran, D-Miami, asked if there was any penalty if the grants violated the rules and went directly to benefit one company.

"The intent of the law and the bill is to give a wide level of discretion to the governor's office,'' Renner replied.

Rep. Daniel Raulerson, R-Plant City, asked who will be performing audits and whether the costs of auditing the program are included "so that we don't have the same abuse of spending that we're trying to battle against"

Renner said annual audits will be performed by "government auditors" but said there was not funding included.

The House bill also requires VISIT Florida to post all of its contracts online; limits travel and per diem expenses of VISIT Florida employees to those of all other state workers; caps agency salaries at about $130,000, the authorized salary of the governor; and requires all contracts worth $750,000 or more to be approved by a panel of legislators.

Corcoran, who exposed VISIT Florida's secret $1 million contract with the performer Pitbull, said that controversy underscored the need for tighter fiscal controls over how Florida markets itself to tourists across the U.S. and overseas.

Buried in HB 1A is language carried over from the regular session that requires any public money given to a tourism business must be matched dollar-for-dollar by private contributions. The bill specifically prevents using matching money from local tourism groups in Miami, Fort Lauderdale, Tampa, St. Petersburg and elsewhere funded mostly by bed taxes paid by tourists.