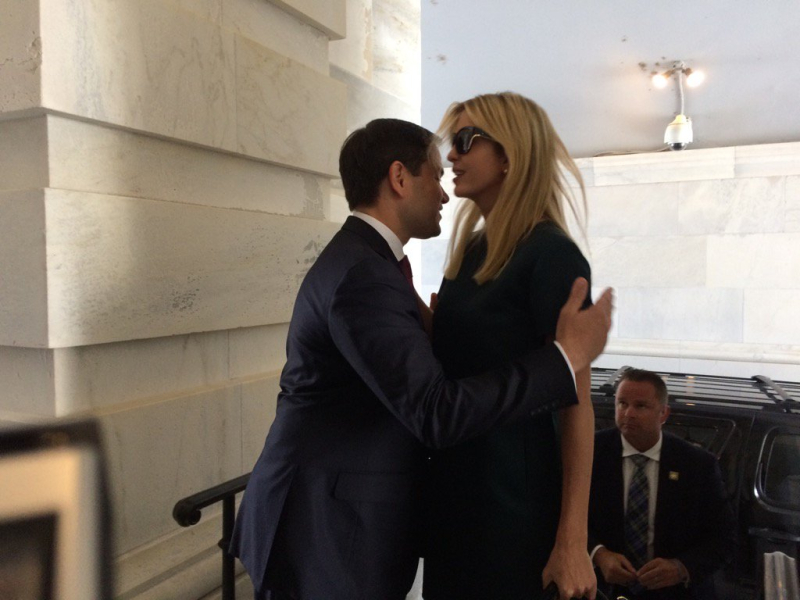 Sen. Marco Rubio hosted Ivanka Trump at the Capitol on Tuesday to talk about one of their shared priorities: a childhood tax credit.

"There is a growing desire within the Republican conference, within the Senate and House, to address the fundamental factor that there are people in America who have decided they can't afford to have children because they can't take a month off of work and not be paid," Rubio said after the meeting.

Trump has long championed a mandatory six-week paid leave for parents and a child tax credit for couples making less than $500,000 a year that would allow them to deduct child care expenses from their income taxes. Lower-income families who wouldn't benefit from a tax deduction could receive a rebate of up to $1,200 a year for child care expenses.

"We're in the early stages of trying to figure out the right approach," Rubio said.

Rubio and Trump didn't get into specifics about how they would expand the tax credit or offer paid leave during the meeting, Rubio said.

"Today was in receive mode, listening to some of the different concepts and ideas that are already out there and figuring out how some of these can work together," Rubio said. "It was really more of an introductory, first step meeting but it was a good one."

Also in the meeting were Republican Sens. Deb Fischer of Nebraska, Joni Ernst of Iowa,  Mike Lee of Utah, Steve Daines of Montana and Tim Scott of South Carolina.

Rubio, Lee and Fischer have each sponsored legislation that would provide tax credits to businesses that provide paid leave to parents.

Rubio also said that it would be his preference to include a child tax credit as part of a larger tax overhaul, but that he's prepared to move forward on a standalone bill if it can't be included.

"That would be ideal, if there's going to be a broad tax reform, for the pro-family component to be a part of it," Rubio said. "But if it doesn't happen we're prepared to move independently of a broader reform."

Rubio said that younger Senators in their 30s, 40s and 50s with young children are particularly sensitive to the challenges that come with raising children.

"People used to tell me, 'How can you have four kids, it's really expensive?'" Rubio said. "And I would say all you've got to do is put more water in the soup, but now you're finding out that is not necessarily always the case."