Miami Senate candidates kick off fundraising (at the Biltmore, natch) 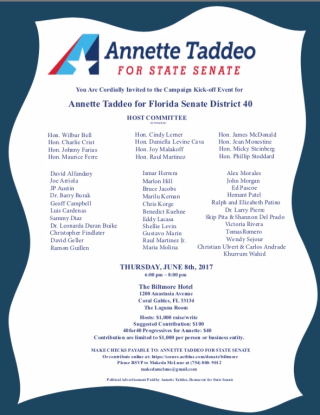 At least two candidates vying to replace state Sen. Frank Artiles have scheduled fundraisers over the next week at the luxe Biltmore Hotel in Coral Gables.

Democrat Annette Taddeo has invited donors to the Biltmore on Thursday -- a date that got unexpectedly complicated last Friday after Republican legislative leaders scheduled a special session to take place from Wednesday to Friday of this week in Tallahassee. Sitting lawmakers can't fundraise during session, so Taddeo's camp had to remove some legislators from its invitation, Taddeo's political consultant Christian Ulvert wrote in an email attached to the invitation.

Meanwhile, Republican Rep. Jose Felix Diaz, whose campaign will presumably be interrupted by the three-day special session, will fundraise at the Biltmore next Monday, according to an invitation obtained by the Miami Herald. Because that date is after the special session, Diaz's event lists big-name lawmakers as hosts -- House Speaker Richard Corcoran of Land O'Lakes, future Speaker Jose Oliva of Miami Lakes and Rep. Chris Sprowls of Palm Harbor -- and along with a slew of other GOP representatives.

"Any contributions that can be sent to us by tomorrow for the first report would be greatly appreciated," Goldmeier wrote. "The election dates for this special election are on July 25th (primary) and September 26th (general) so we are working in an expedited manner."