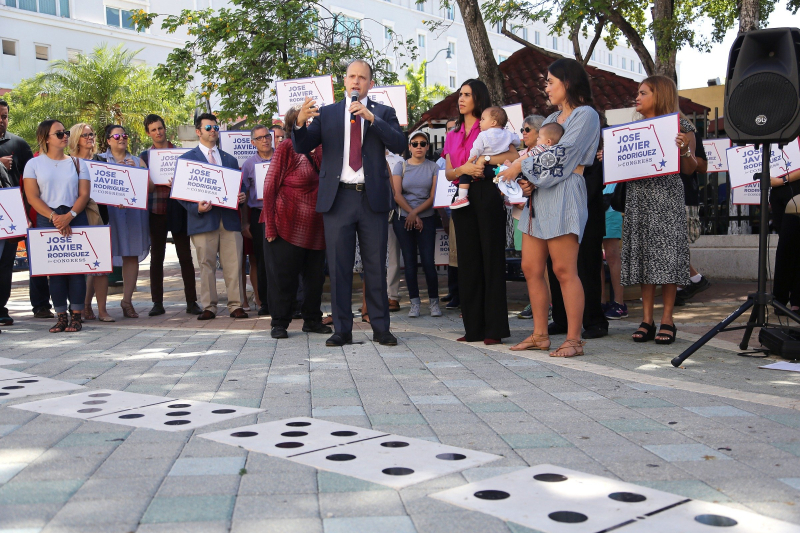 State Sen. José Javier Rodríguez picked the most Little Havana of scenes to kick off his campaign for Congress on Tuesday, gathering a small group of supporters outside Calle Ocho's Domino Park as he pitched himself as the candidate to tackle big issues -- and what's expected to be a hotly contested race.

"When I'm speaking with neighbors, families, residents, constituents -- they're talking to me about the fact that the residents of District 27 need access to affordable health care. And that starts with protecting the gains in the Affordable Care Act," he said, a day after the Senate postponed a vote on legislation to undo some of former President Barack Obama's signature law.

As he spoke, men shuffled dominoes on nearby tables. An old-school peanut salesman walked by ("¡Manícero!"). Tourists streamed out of double-decker buses.

Laying out his campaign platform in addition to healthcare, Rodríguez mentioned the economy and climate change, though he offered no specifics, even when pressed about what Obamacare tweaks, if any, he'd support.

He declined to call himself a "moderate" Democrat, though that's how he's voted in the Florida House and Senate -- and how he's likely to run in the Southeast Miami-Dade County district, which leans Democratic but is currently held by Republican Rep. Ileana Ros-Lehtinen, who is retiring. Rodríguez praised the congresswoman's constituent services as a model to follow.

Several other Democrats are also seeking Ros-Lehtinen's seat. Rodríguez was the first big-name Democrat to jump into the race after Ros-Lehtinen's retirement announcement last month.

Not once did he name Democrats' likely bogeyman in next year's election: President Donald Trump.

"My career of public service, it has always been motivated by trying to serve the public. It has never been about partisan bickering," he said, adding that "Trump is not going to be on the ballot."

"You better bet that in Congress I'm going to hold the White House accountable on some really, really troublesome issues that we're seeing out of Washington right now," he said.

Rodríguez did make sure to note his biographical details, the kind that political operatives tend to love: The 38-year-old son of a Cuban exile volunteered for the Peace Corps in West Africa and graduated from Harvard Law School before being elected to the Legislature in 2012.

And that is at the core of his key argument to Democrats looking to flip the seat: He's gotten elected in purple districts before.

"Those were all some of the most competitive elections in the state," Rodríguez said.