Mallea ran Rubio's long-shot 2010 Senate campaign. But the ad appears to refer to 2016, when Mallea worked backed Jeb Bush instead of Rubio for president. Mallea was an aide to then-Gov. Bush years before he managed Rubio's Senate campaign. Bush's super PAC, Right to Rise, which hired Mallea in 2015, poured money into attacking Rubio.

"Candidate Jose Mallea betrayed us," the Spanish-language TV ad says. "He says he's a friend of Marco Rubio's, but when we had the opportunity to elect one of our own to the White House, Jose Mallea directed millions of dollars in false attacks against Rubio." 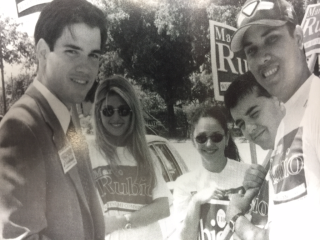 Mallea's friendship with Rubio dates back to before 1998, when Rubio first ran for the West Miami City Commission. A photo of the two young men appears in Rubio's first book, "An American Son."

"I am proud of my 21-year friendship with Marco Rubio," Mallea said Thursday. "I have worked with Marco Rubio for years, and I was proud to stand with him in his very first campaign. Being his campaign manager in 2010 was the honor of a lifetime."

It's unclear where their friendship now stands.

In addition to invoking Miami's 2016 presidential campaign ghosts, Perez's ad accuses Mallea of accepting "thousands of dollars from special interests to launch his campaign for a district he doesn't live in."

Mallea said he moved into a rental apartment in Doral, which is in District 116, two weeks ago.

The special primary election is July 25.