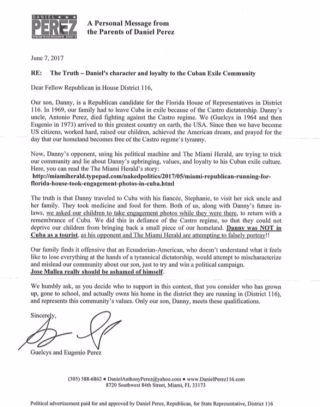 "Mallea is a real Republican, Cuban-American, who wants to fight for a free Cuba," the call said. "In contrast, his opponent, Daniel Perez, was a beneficiary of the Obama-Castro policy, going to Cuba on a luxury vacation to take his engagement photos."

Cuba has been an ongoing theme in the race since the Miami Herald reported last month on Perez's wedding-engagement photo shoot earlier this year in Havana, which were posted online on two websites. The photos were subsequently taken down. 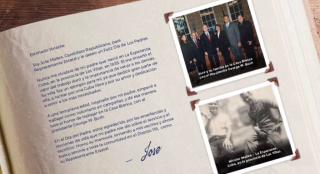 Meantime, Perez's campaign was sending voters a letter, in English and Spanish, from Perez's parents, vouching for their son's Cuban roots. The family left Cuba in 1969, Guelcys and Eugenio Perez wrote in their "personal message," which also said Perez's uncle Antonio Perez "died fighting against the Castro regime."

"The truth is that Danny traveled to Cuba with his fiancée, Stephanie, to visit her sick uncle and her family," they wrote. "Danny was NOT in Cuba as a tourist, as his opponent and The Miami Herald are attempting to falsely portray!!"

In the same letter, Perez's parents referred to Mallea as "an Ecuadorian-American, who doesn't understand what it feels like to lose everything at the hands of a tyrannical dictatorship." Mallea is of half-Cuban and half-Ecuadorian descent.

On Sunday, Mallea's camp mailed a flier of its own, tied to Father's Day, noting Mallea's father was born in Cuba.

The letter doesn't mention Mallea's old ties to a Cuba exporter, whom Mallea has characterized as his friend even though he disagrees with his Cuba business.

Older Cuban-American voters are a key and reliable Republican constituency in local races -- particularly in special elections, when relatively few people tend to cast ballots, and in a GOP-leaning district.

A poll commissioned by the Perez campaign found Perez, an attorney, leading Mallea, a brewery owner with political ties to Jeb Bush and Marco Rubio, by 37-13 percent, with 51 percent of respondents undecided. The poll by McLaughlin & Associates surveyed 234 likely voters from June 13-15 and has an error margin of plus-or-minus 6.4 percentage points. After pushing a series of positive and negative messages, the pollsters said Perez's margin only increased, though a detailed breakdown of questions and results was not made available.

It's the first survey whose results have been made public in the race. The results suggest if both candidates are mostly unknown, Perez has higher name ID given his more recognizably Hispanic surname.

With mail-in ballot voting for the July 25 primary beginning next week, the candidates are expected to step up their paid media campaigns to increase their recognition and message. Democrat Gabriela Mayaudon awaits for the Sept. 26 general election.