« Defund HB 7069? Senator will attempt it, although House won't accept it | Main | Jeff Brandes doesn't like the medical pot deal »

Speaker Richard Corcoran: Florida Senate 'did not stick to the plan' 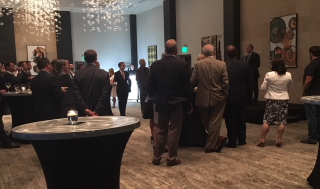 At the end of Day 1 of the special session, House Republicans dodged the rain to attend a reception Wednesday night that was planned as a grand exit, a celebration of an agreement on schools, jobs and tourism money. But the session is in a ditch with the House and Senate battling each other.

"That was the plan," House Speaker Richard Corcoran told about 35 lawmakers who attended the social hour at the Hotel Duval ballroom. "I don't want to say who, but one of them did not stick to the plan," an obvious dig at the Senate.

Then the Land O'Lakes lawyer rallied members to continue to "go after the status quo" on education and taxes. He dismissed talk that his deal with Gov. Rick Scott was cloaked in too much secrecy: "Every special session is done the same way." He said Scott's signing of HB 7069 signals "transformational" education policy in Florida, to be followed by Scott replacing three retiring state Supreme Court justices right before leaving office in January 2019, a scenario that could face a challenge.

Corcoran described a Senate willing to "cave to special interests" by pushing a property tax increase on new construction to pay for a K-12 funding increase and by challenging Scott's vetoes of their "porkbarrel projects."

"It's going to be a tough three days, or three weeks. But we'll find out," Corcoran said. "Hopefully, we'll get all this squared away."