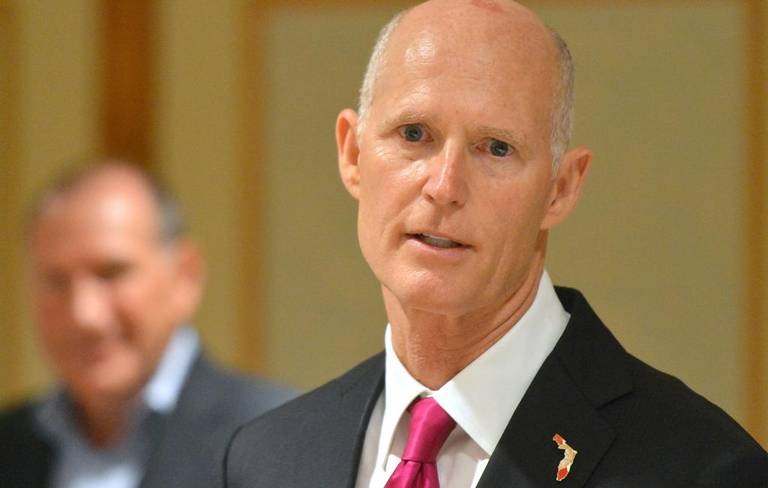 But Scott, a Republican and ally of Donald Trump, demurred when asked if Sen. Marco Rubio should vote for the bill as written. Scott will meet with Rubio later on Tuesday afternoon.

"There's constant conversations and it's changing, so you can't say where it is right now," Scott said. "Let's all focus on the biggest here, and the biggest issue here is cost reduction. What I'm talking about to him right now are the things that are important to our families and our taxpayers."

Rubio hasn't given any indication that he plans to block the bill's path to the Senate floor, although he's brought three staffers from Tallahassee to Washington to review the bill.

Scott said a big priority for him is to make sure that states who didn't expand Medicaid, like Florida, receive the same per capita funding for Medicaid as a state that chose to expand the program under Obamacare.

"We're not treated the same way as a state like New York," Scott said, arguing that New York gets $23 billion in federal dollars for health insurance while Florida gets $14 billion, despite Florida having more people to cover than New York.

"Our federal tax rates aren't lower so why should we get paid less?"

Senate leadership is urging a vote on the health care bill this week, saying that a further delay will make it harder for a majority to support the bill. But a

Four Republican senators, including moderates Susan Collins of Maine and Dean Heller of Nevada along with conservatives Rand Paul of Kentucky and Ron Johnson of Wisconsin, said they will not allow the legislation to proceed in its current form. The GOP enjoys a four seat majority in the Senate, meaning three Republican dissenters can kill the bill.

Even if the bill passes the Senate, it could be a tough road to make it through the House. A group of conservative lawmakers dubbed the Freedom Caucus are expected to oppose the Senate bill in its current form.

"I don't have a vote," Scott said. "But it's very important to repeal and replace Obamacare."