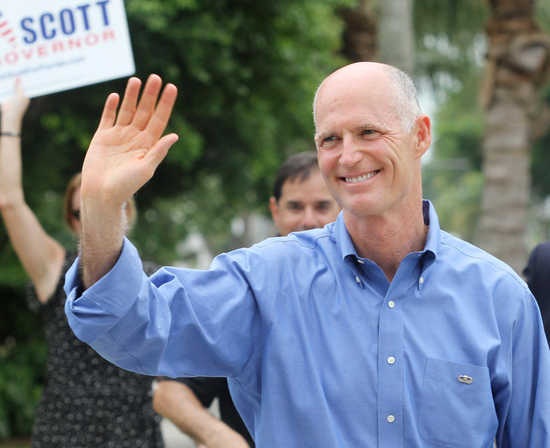 Florida Gov. Rick Scott saw his net worth increase by more than $30 million last year as his blind trust rose in value, a reversal of fortunes that had seen him lose $27 million the year before.

Scott, a two-term Republican and former businessman, filed his annual financial disclosure form Friday showing that his net worth was more than $149 million at the end of 2016, a 25 percent increase from the previous year.

Scott, a former hospital executive, has maintained most of his assets in the Gov. Richard L. Scott 2014 Qualified Blind Trust. The law allows public officials to create a blind trust in lieu of revealing their assets on a financial disclosure form. But by shielding the investments from the governor’s direct control, it also shields from the public any information about how the governor increased his wealth.

Questions have followed Scott since he first created the blind trust when he was elected in 2010. When Scott ran for re-election in 2014, he briefly dissolved his first trust and released information about the individual holdings in it. He also released his tax returns for 2013.

The tax returns showed that the Scott family earns millions more than the governor reported individually on his financial disclosure form. It also raised questions about whether Scott may have control over assets held by his wife, Ann Scott.

An investigation by the Herald/Times into those investments found that filings with the Securities and Exchange Commission indicated the governor had substantially larger holdings in several companies than what he reported to the state. A lawsuit was filed by George Sheldon, a 2014 Democrat candidate for attorney general, but a court ruled that the governor could not be compelled to disclose more information.

Tallahassee attorney Jim Apthorp appealed the decision, arguing that the blind trust law violated the constitutional provisions of the state’s public records law, but the Florida Supreme Court rejected that argument in 2015.

Both Scott and his wife maintain the blind trust. Florida law does not require spouses of elected officials to reveal their financial holdings.

The governor's 2016 disclosure shows that he saw the value of his home in Naples dropped from $15.4 million to $15 million, but saw a $20,000 increase in the value of an adjacent $144,000 boathouse. His 60-acre Montana residence, however, was listed at the same value the governor has listed it as for the last three years.

The governor continues to report payments due from four individuals or entities, including S. Scott, P. Phillips, Luther Oaks, and Roland Alonzo.

Under the law, the governor could withdraw money from his blind trust at the end of December 2016, use it to make an investment in 2017, and not have to disclose that investment until June 30, 2018, the next reporting year. That report is expected to show another spike in the governor’s net worth as a result of the multi-million sale of a Michigan-based plastics company in which the governor’s firm was a principal owner.

In the governor's final year in office, 2018, he will not have to make any financial disclosure.