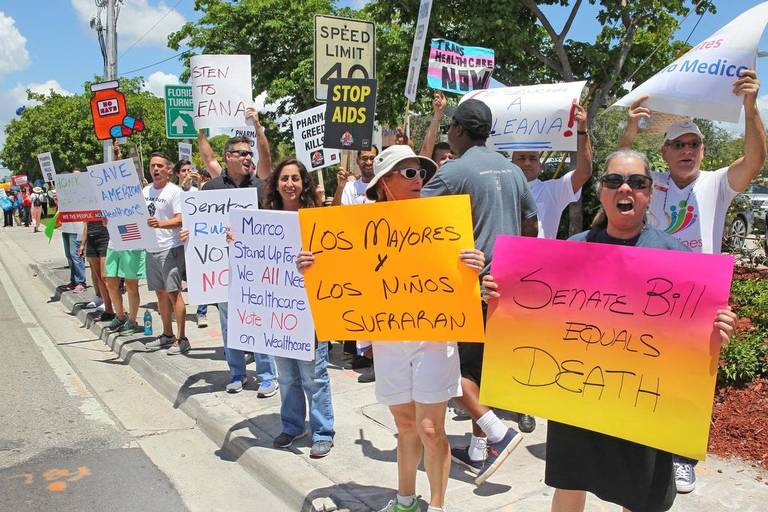 By Monday, three staffers sent by the three state GOP leaders were in Washington, going through the bill with Rubio aides. Scott himself will travel to Capitol Hill on Tuesday to offer his thoughts to Rubio directly.

The Republican senator has yet to say how he'll vote. But he's hardly expected to oppose the legislation, given his past support to repeal the Affordable Care Act. And the state staffers, expected to remain "embedded" in Rubio's office all week, probably won't give him a compelling reason to vote no, either: Scott, Corcoran and Negron chose not to expand Medicaid under the ACA and have been critical of the law. That's even though Florida, with its large uninsured population, was one of the states to see the most people covered under Obamacare.

Rubio outlined his criteria for the bill in a Facebook Live appearance last week. For example, he wants people with pre-existing conditions to be protected and Florida to be "treated fairly" on Medicaid (that is, not penalized for not expanding the program).

"Rubio, do your job!" some of them chanted.

After the nonpartisan Congressional Budget Office estimated Monday that 22 million Americans would lose health-insurance coverage by 2026 under the Senate plan, two Republican senators said they would vote against the bill as written: Susan Collins of Maine and Rand Paul of Kentucky. Three GOP no's would kill the bill.

On the Democratic side, Sen. Bill Nelson took to the Senate floor to oppose the legislation: "This bill is just as bad as the House bill," he said.