« A fed-up Senate spells serious trouble for Rick Scott and Corcoran | Main | Museum Park could get a $2 million playground, and a redevelopment agency the bill » 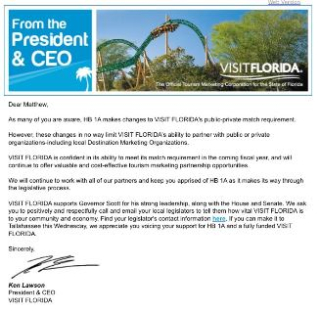 A compromise struck between Scott and Corcoran means that VISIT gets fully funded at $76 million, but at a steep price. Buried in House Bill 1A is language carried over from the regular session that requires any public money given to a tourism business must be matched dollar-for-dollar by private contributions. The bill specifically prevents using matching money from local tourism groups in Miami, Fort Lauderdale, Tampa, St. Petersburg and elsewhere, known as DMOs or destination marketing organizations, that are funded mostly by bed taxes paid by tourists.

In an email to industry members Tuesday (at left), Lawson noted the matching requirements and said: "These changes in no way limit VISIT Florida's ability to partner with public or private organizations, including local Destination Marketing Organizations." Similar language was in HB 5501, the tourism package from the regular session, which Scott has said he will veto because that bill cut VISIT's funding from $76 million to $25 million next year.

It was apparent that Lawson acted without first securing the support of VISIT Florida's board of directors, which includes Bill Lupfer, a respected industry veteran and president of the Florida Attractions Association. Lupfer emailed a call to action to his members Wednesday urging them to rally behind a different Senate tourism bill (SB 2A) sponsored by Senate Appropriations Chairman Jack Latvala, R-Clearwater, whose bill would allow local bed tax money to match state money. "Call your rep today to support Senate Bill 2A. Special session affects all members," the Florida Attractions Association said on Twitter.