At key moment, Cuban-American lawmakers adopt Venezuela cause as their own 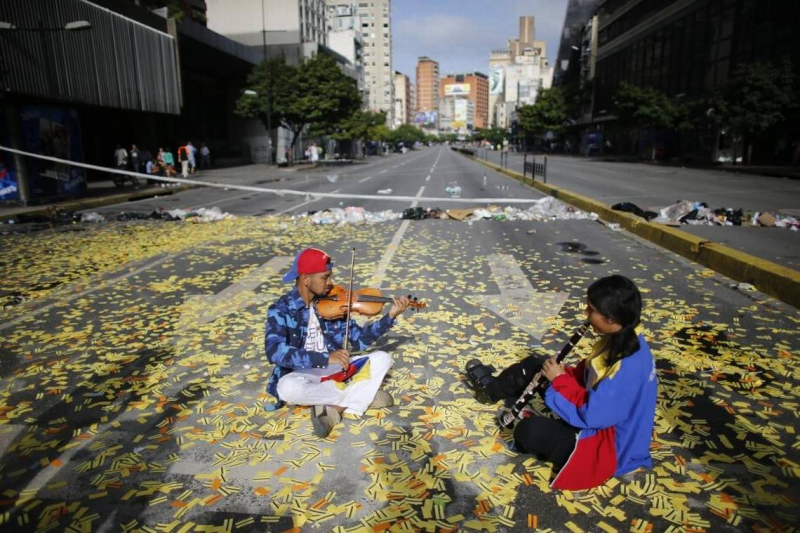 For months, Cuban-American lawmakers have deployed familiar rhetoric to warn Washington colleagues of a democracy under threat in Latin America, where people are deprived of food and the ballot box, and where economic collapse could empower Russia uncomfortably close to home.

“This is a dysfunctional narco-state that is in a death spiral in terms of its ability to function,” said Sen. Marco Rubio of Florida.

“We are talking about a nearly failed state in our own hemisphere,” said Sen. Bob Menendez of New Jersey.

“We will have a swift and firm response from our own administration,” said Rep. Ileana Ros-Lehtinen of Miami.

But the tough talk isn’t about Cuba. It’s about Venezuela.

The fight for a free Cuba — a fight carried in their bones, transcending all politics — has fueled Cuban-American lawmakers for decades in their campaign against Fidel and Raúl Castro. But President Donald Trump has already taken a tougher line toward Cuba, as the legislators wanted. So, the unfolding Venezuela crisis has become Cuban Americans’ new crusade.

“Just like it has been too long for the Cuban people, most people are coming to the understanding that this is part of the same movement, the same cancer that has been sickening the Cuban people and the Venezuelan people for decades now,” Miami Republican Rep. Carlos Curbelo said in a Capitol Hill speech to Venezuelan activists and lawmakers Wednesday.

Cuban-American Republicans and Democrats agree President Nicolás Maduro must be stopped. Their united front could amplify their clout: As with Cuba, one of their own — Rubio — has proven to be the White House’s go-to legislator on Latin America.

Rubio, a Republican who’s spent years in Congress criticizing Maduro, says he’s been in regular touch with Trump and especially Vice President Mike Pence about how to sanction Venezuela if Maduro moves forward with a planned July 30 election. That vote would create a constituent assembly empowered to rewrite the nation’s constitution, effectively replacing a democratically elected legislature with Maduro loyalists.

“The United States will not stand by as Venezuela crumbles,” Trump said in a statement Monday, released as Rubio made similar remarks on Twitter. “If the Maduro regime imposes its Constituent Assembly on July 30, the United States will take strong and swift economic actions.”

Rubio, Ros-Lehtinen, Curbelo and fellow Miami Republican Rep. Mario Diaz-Balart back banning Venezuelan oil imports, a drastic measure once considered unthinkable against the No. 3 oil supplier to the U.S. But also in favor is a local Democrat, Weston Rep. Debbie Wasserman Schultz, who represents thousands of Venezuelans.

The message: On Cuba, Rubio and company faced significant opposition, both on Capitol Hill and in Trump’s administration. On Venezuela, they don’t.

“There’s not a single senator that I’ve seen, and no House member that I’ve heard from, who still supports this regime,” Rubio told the Congressional Hispanic Leadership Institute in bilingual remarks Wednesday. “Once there were people who sometimes backed [former Venezuelan President Hugo] Chávez, or said things about Chávez in the past. But that doesn’t exist anymore. No one here supports Maduro.”

Even Rep. Gregory Meeks, a New York Democrat who worked with the late Chávez, frequently traveled to Venezuela during Chávez’s presidency and is the only sitting member of Congress who attended Chávez’s funeral, supports sanctions.

“We are compelled to take a stand on what’s right,” Meeks said. “Sanctions that are being considered are the right things to do.”

Behind the bipartisan push is a deeply held belief that Maduro is just another Fidel — and a sense that if Cuban Americans and their allies don’t defend Venezuela in Washington, no one will.

“We need to let the Venezuelan people know that they are not alone in this fight, that we stand together with them, that we will not rest until Venezuela is free from oppression and is once again a nation of democracy and the rule of law,” Ros-Lehtinen said in an impassioned speech Wednesday.

The position is certainly heart-felt, but politics aren’t entirely out of the picture: Venezuelans fleeing Chávez and now Maduro could emerge as a significant voting bloc in Florida, the nation’s largest swing state.