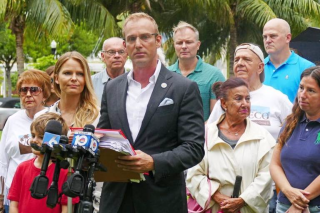 Miami Beach Commissioner Michael Grieco held a news conference Monday to confirm what many top backers already knew: He has abandoned his embattled bid for mayor.

“This year’s proven to be exceptionally challenging for me, my family and the community, forcing all of us to deal with distractions and political attacks that have no purpose but to cloud my service to the people of Miami Beach,” Grieco said.

He read a prepared statement flanked by his family and about 30 supporters in a public park around the corner from his South Beach home. The crowd cheered as he approached through a light rain.

Grieco will continue campaigning, however: He’s now running for a second term as commissioner.

Last week, Grieco began calling supporters to let them know he would drop out of a competitive mayoral race against former state Sen. Dan Gelber. Word spread quickly around the Beach over the weekend, with many wondering how this would impact an already-crowded race for his commission seat, in which four other candidates were also in the running.