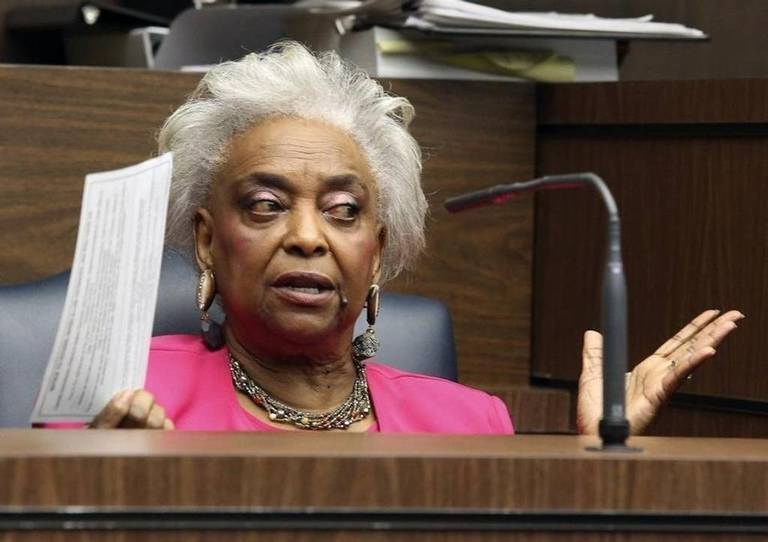 Broward Supervisor of Elections Brenda Snipes is expected to testify Monday in a lawsuit that alleges she has failed to adequately purge voter rolls of ineligible voters including those who have died.

The lawsuit was filed on behalf of the conservative American Civil Rights Union in federal court in 2016. (Hat tip to the Sun Sentinel about Snipes' upcoming testimony.)

The ACRU is being represented by the Public Interest Legal Foundation which has filed similar lawsuits in other states including North Carolina, Virginia and Texas. The president and general counsel of the foundation, J. Christian Adams, is a member of President Donald Trump's commission on voter integrity which has sought to collect voter roll data from all of the states. Trump's allegations about widespread voter fraud in the 2016 election have repeatedly been debunked by PolitiFact, a Miami Herald news partner.

The complaint filed against Snipes alleges that she has violated federal law by failing to conduct reasonable voter list maintenance for federal elections. It does not allege that ineligible voters cast ballots. The lawsuit seeks that a judge order her to make improvements in handling list maintenance.

The complaint states that Broward's voter rolls have "either more total registrants than eligible voting-age citizens or, at best, an implausibly high number of registrants," according to data from the U.S. Census Bureau and the Election Assistance Commission.

At the time of the 2014 general election, approximately 103 percent of the citizens of voting age were registered to vote, the complaint states.

Among actions the plaintiffs seek is for Snipes to request jury recusal forms from the clerk of courts to determine if anyone who has declared themselves a non-citizen has registered to vote. (Florida's controversial attempt to purge non-citizens from the voter rolls before the 2012 election led to about 85 being removed statewide.)

Snipes disputed the allegations in a letter she wrote to ACRU in February 2016. Snipes wrote that Broward "adheres strictly" to the state's guidelines about voter list maintenance. Court records show Broward removed about 240,000 voters between 2014 and 2016.

"At no time in my tenure, which began in November 2003, has the number of registered voters outnumbered the live persons living in Broward County," she wrote.

Before filing the suit, in January 2016 the plaintiffs sent letters raising concerns about voter roll maintenance to multiple Florida counties in addition to Broward including Miami-Dade, Palm Beach, Orange, Clay, Flagler and Santa Rosa. However, a lawsuit was only filed against Broward County.

When asked why the plaintiffs ultimately only sued Broward, a spokesman for the Public Interest Legal Foundation pointed to Adams's opening statement in which he said that Snipes was unwilling to "engage in substantive discussions -- essentially saying all counties in Florida who received a letter from the ACRU must be involved in those discussions."

Broward has about 1.2 million voters and has the highest number of registered Democrats -- about 600,000 -- in the state. Snipes, a Democrat, was first appointed to fill a vacancy in 2003 by then Gov. Jeb Bush and has subsequently won elections.

The trial began July 25th and is being presided over by U.S. District Court Judge Beth Bloom. Burnadette Norris-Weeks is representing Snipes.

A spokesman for the plaintiffs said that Snipes is expected to begin testifying at 9 a.m. Monday.

Miami Herald photo of Brenda Snipes testifying in a separate matter pertaining to ballots in 2016.