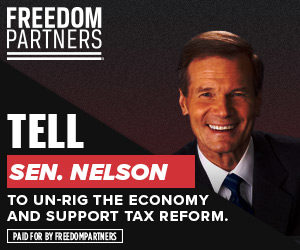 The ads target House Ways and Means lawmakers who have expressed support for comprehensive tax reform, but who have yet to take a stand against the Border Adjustment Tax on imported goods, according to Freedom Partners. The ads, which also target key Senate members, target members from both parties and in Florida also includes U.S. Rep. Vern Buchanan.

Freedom Partners supports a series of changes to taxes including lowering individual and corporate rates, eliminating most tax credits and deductions and the estate tax and taxes on gifts.

When asked for his opinion about the proposed changes, Curbelo's spokeswoman Joanna Rodriguez replied: “Congressman Curbelo is still reviewing all the different proposals and concepts for comprehensive tax reform. His goal is a simpler, fairer tax code that leads to greater economic growth, prosperity, and opportunity for Florida families and employers.”