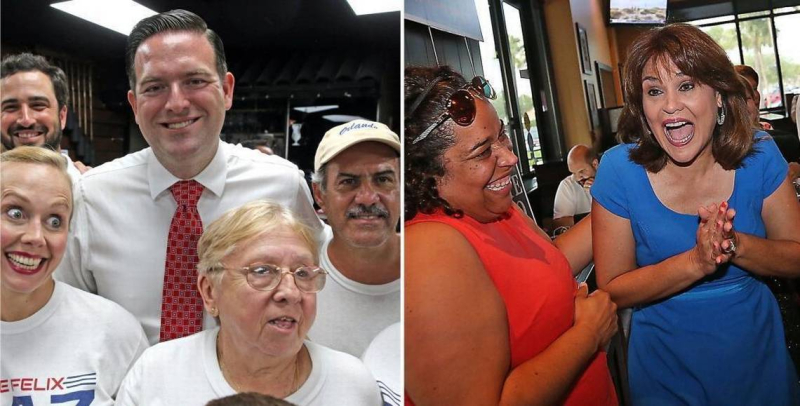 Taddeo led Diaz by 42-38 percent in the June poll, released Wednesday after both candidates won their respective primaries Tuesday. The survey, by Anzalone Liszt Grove Research for the Florida Democratic Legislative Campaign Committee, also found Taddeo ahead by 16 percentage points among voters without party affiliation who couldn't cast primary ballots, according to a memo from the pollsters summarizing their results.

"The poll also shows a generic ballot currently favors a Democrat, and Donald Trump continues to be toxic in this seat that he lost by roughly -17 points in 2016," Josh Weierbach, the FDLCC's political director said in a statement.

According to the poll, the Republican president is viewed unfavorably by 56 percent of respondents. Forty percent view him favorably.

While Trump did lose the Senate district to Democrat Hillary Clinton, U.S. Sen. Marco Rubio fared much better, besting Democrat Patrick Murphy there. And the district was represented by a Republican, Sen. Frank Artiles, until he resigned in April.

Diaz is a former contestant on Trump's "The Apprentice" reality TV show. Faced with GOP opponents who tried to tie themselves to Trump as much as possible, Diaz also campaigned in the primary displaying his photo with the president -- a move Democrats hope will be a liability in the general election. Diaz, however, is expected to outraise Taddeo, which should help him campaign as his own man separate from the White House.

The Anzalone firm interviewed 400 likely voters by phone from June 21-26 in English and Spanish. The poll, which used a GOP-leaning sample, has an error margin of plus-or-minus 4.9 percentage points. Democrats did not publicly release the full poll results, including what the questions were and how results broke down for each. That's likely because the poll included questions intended to test future campaign messages.