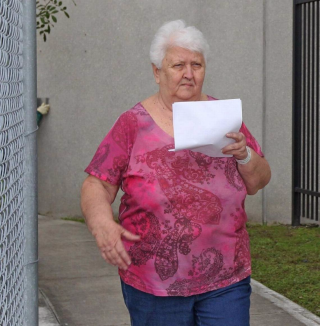 An elderly woman pleaded guilty on Monday to filling out other people’s mail-in ballots while working at Miami-Dade’s elections department.

Now, a judge must decide whether to give 74-year-old Gladys Coego jail time.

Prosecutors want six months behind bars. Her defense lawyer is arguing for no time in jail.

Milián will decide a sentence on Aug. 16. She faces a maximum of up to 10 years in prison but such a harsh sentence is unlikely because she has no previous arrests.

In a case that got national media attention, Coego was arrested for voter fraud just weeks before the November election. It was a campaign season marked by heightened sensitivity after then-presidential candidate Donald Trump made repeated allegations of a rigged election.

Although there’s never been any evidence of widespread voter fraud in the United States, Trump has persisted with his claims, even creating a controversial commission to investigate the issue. Earlier this month, the Presidential Advisory Commission for Voter Integrity raised concerns about privacy by requesting voter information from states across the country, including Florida.

Coego’s case mirrors that of a woman in Oregon who was arrested four years for marking someone else’s ballot while working at an elections department. She accepted a plea deal that include 90 days in jail.

Coego was arrested along with another low-level campaigner, Tamika Curgil, in an unrelated case. Curgil, an out-of-work security guard campaigning for a pro-medical marijuana campaign, was accused of filing out forged voter registration forms. She got probation, with no felony conviction appearing on her record.