Gov. Rick Scott talks tough on Venezuela sanctions but, as governor, his options are limited 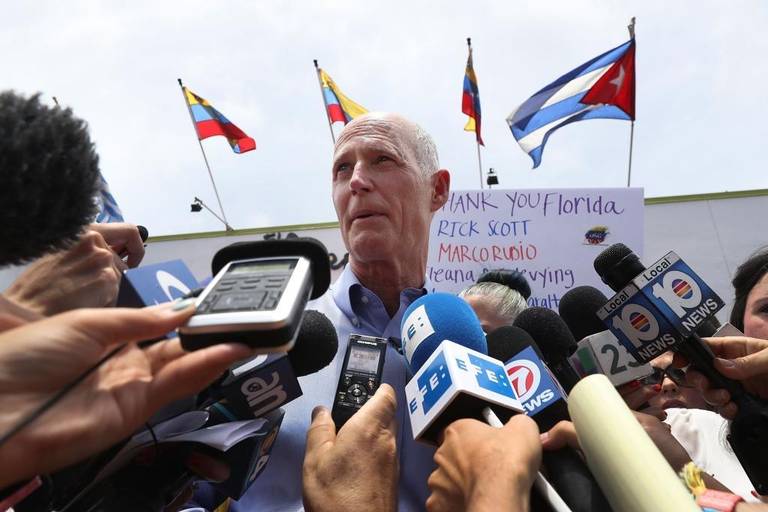 To show his solidarity with Venezuelans, Gov. Rick Scott held a rally in South Florida and repeatedly promised to punish companies that do business with the Nicolás Maduro regime.

But Scott has offered no details as to how that will work and, although the governor and two other members of the Cabinet oversee the Florida Retirement System and its $150 billion in assets, their options are limited. Additionally, a 16-year-old U.S. Supreme Court ruling may bar him from telling state agencies to boycott companies that do business in Venezuela.

“Next month, at my next Cabinet meeting, I will be proposing a resolution that will say any organization that does business with the Maduro regime cannot do business with the State of Florida,” Scott proclaimed at a July 10 rally at the El Arepazo restaurant in Doral. The crowd cheered.

The governor, attorney general and state chief financial officer act as the State Board of Administration but, because they have a fiduciary responsibility to keep the state pension fund healthy, they may not sell off large amounts of assets if that could affect the profitability of the fund — unless they are ordered to by law.

“We are required to manage the fund with the best interests of the beneficiaries in mind, and that may restrict what can be done in any situation,” said John Kuczwanski, spokesperson for the SBA. “But the Legislature can go beyond that and require us to do something else.”

Sen. José Javier Rodriguez, a Miami Democrat who has announced he is running for the congressional seat being vacated by Republican Ileana Ros-Lehtinen next year, said Venezuela’s human rights abuses, increasing violence and disrespect for democracy, merit such a law.

On July 5, he announced he has drafted legislation that would require Florida to divest investments in any “institution or company doing business with the government of Venezuela.”

“The idea is to make this something that we can actually implement,” Rodriguez said Friday. “If we can’t take concrete steps, it won’t mean anything to Wall Street. To Wall Street, money talks.” Rodriguez’s proposal is directed at Goldman Sachs Asset Management, which purchased $2.8 billion in bonds in May from Venezuela’s state-run oil company, and at other firms that engage in “the possibility of future investments of this kind.”

Photo: Florida Governor Rick Scott speaks to the media as he holds a Venezuelan ‘Freedom Rally’ at El Arepazo 2 restaurant on July 10, 2017 in Doral. Scott called on the Venezuelan government to free Leopoldo Lopez, a political prisoner from house arrest, as well as those that have been wrongly imprisoned by Nicolas Maduro's government. Joe Raedle Getty Images