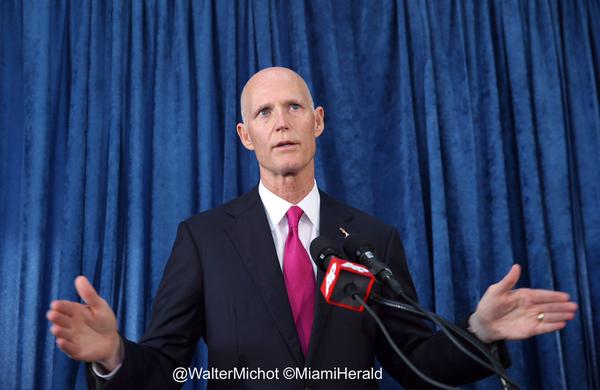 What exactly does Gov. Rick Scott want in return for repeal of Obamacare?

That's an answer that's been rather difficult to discern judging by the governor's public pronouncements. On Friday, the governor's office released an op-ed that gave us a hint that the governor's not happy about the Medicaid reimbursement rates in the Senate's rewrite of the Better Care Reconciliation Act. He says, the bill is "rewarding inefficient states" like New York and punishing what he considers more efficient states like Florida.

Here's what the governor said he doesn't like about the rewrite:

The revamped Senate plan released this week continues to cut $772 billion in Medicaid spending over the next decade, with hundreds of billions in additional cuts in the 10 years after that. The cuts include a four-year phase-out of Obamacare’s Medicaid expansion with a new restriction on the program's growth rate that begins in 2020.

Sen. Marco Rubio, who said Thursday he will vote to bring up a vote on the new Senate plan, wants to see changes to those cuts, however. He said he will introduce an amendment that ensures Florida, which chose not to expand Medicaid, isn't locked into a baseline "that puts us at a disadvantageous position."

Here is what the governor's letter appears to support:

Scott spokesperson McKinley Lewis added these priorities of the governor's:

There are so many more questions left unanswered about where the governor stands.

Does he support the Senate rewrite that removed two significant tax cuts for the wealthy to add $45 billion to combat opioid addiction and billions to offset  higher insurance costs for low-income people and to stabilize the individual markets?

Does he support the additional $182 billion that goes to states to help drive down the cost of premiums? How much more does he think Florida should be getting in Medicaid money? How much less should states like New York get?

Does the governor agree with Rubio that the new draft includes some positive improvements for Florida -- like steering more Medicaid DSH money to hospitals that serve the uninsured in Florida?

Does the governor like the piece that includes catastrophic coverage in the scaled down insurance coverage options?

When the governor talks about efficiency, it is efficient if people can't afford insurance and have to rely on emergency rooms for primary care? If Obamacare is repealed, how quickly will Florida have a plan in place to make sure the uninsured get the preventive care they need to keep them out of hospital ERs? What would that plan look like?

These questions were posed to the governor's office Friday. Instead of answering, Lewis asked that we print this statement which makes clear one thing -- the governor may know what he wants Congress to do, but he's not ready to be pinned down by a statement that tells the public what it is.

"We are carefully reviewing the bill,'' Lewis said. "While it’s better than Obamacare, the governor wants to continue to find ways to make it better for Florida."

Here's the text of the governor's op-ed:

I recently traveled to D.C. to fight for Florida as the U.S. Senate debated repealing and replacing Obamacare. For far too long, D.C. politicians have focused only on the grand bargain of repealing and replacing Obamacare, ignoring the opportunity to make incremental changes to get rid of the taxes and mandates and roll back the federal welfare state.

While a new bill has been introduced this week, it has taken far too long to get rid of the disaster of Obamacare, and I fear the politicians in Washington will never find common ground on this critical topic. There is absolutely no question that Obamacare must be repealed immediately so Americans can actually afford to purchase health insurance.

To lower costs, fundamental reform to the Medicaid program is needed. Obamacare encouraged a massive expansion of Medicaid to cover able-bodied, working-aged adults, even as 600,000 elderly Americans and individuals with disabilities nationwide sit on waiting lists to access services through this program.

Long before the Obamacare debate, New York ran a terribly inefficient Medicaid program for decades which ran up their state’s deficit and hindered their economy. Florida is the exact opposite. We have been efficient with our dollars while providing quality care to those who truly need Medicaid.

As a reward for its fiscal irresponsibility, for every dollar New York pays in federal income taxes, they receive a quarter back from the federal government for Medicaid. In comparison, Florida only receives 16 cents for every tax dollar that is sent to Washington. Current Congressional bills lock in past federal spending, which would make this inequity permanent.

That makes absolutely no sense. If Florida is going to get a smaller rate of return on its federal taxes, shouldn’t our federal taxes be cut? New York, with fewer residents than Florida, receives more than $33 billion per year for Medicaid while Florida receives less than $15 billion. How is permanently locking in these spending levels fair to Floridians when New York has been terribly inefficient with their taxpayers’ dollars? The federal government should cut income taxes for Floridians by 30 percent. This would put our share of federal Medicaid funding as a percentage of taxes paid on par with New York. This reduction would save Floridians thousands each year.