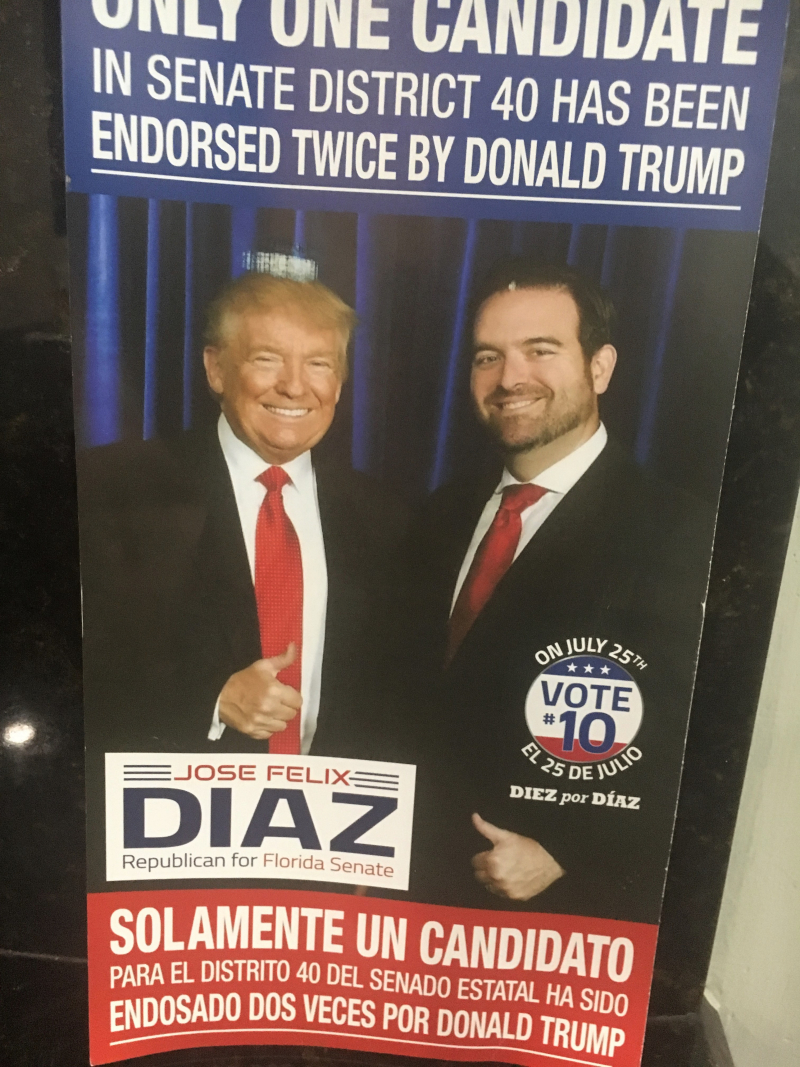 A mailer in a Miami senate race says that Donald Trump has only backed one of the candidates, but voters will have to read the fine print to figure out when Trump supported state Rep. Jose Felix Diaz.

It appears that Trump supported Diaz in his previous bids for state house years before Trump's successful bid for president.

"Only one candidate in Senate District 40 has been endorsed twice by Donald Trump," states one side of the mailer, showing a photo of Trump and Diaz smiling together giving the thumbs up sign.

The other side of the mailer states "Jose Felix Diaz supports Donald Trump" and shows a photo of Diaz, Trump and Vice President Mike Pence. The mailer displays a note written by Trump on an invoice: "Jose -- Good Luck -- we are all proud of you -- you will win!"

If you read the fine print of the invoice, it shows a date of June 2012. State campaign finance records show that Trump donated $500 to Diaz's house race in July 2012 (as well as an earlier race in March 2009.)

Note that the mailer doesn't say President Donald Trump but only says Donald Trump -- another sign that as president, Trump isn't supporting any candidates in the Miami senate race.

The White House didn't want to weigh in on this mailer, but it would be unusual for a president to endorse in a state legislative race even though Diaz and Trump know each other.

Diaz was once a contestant on Trump's "The Apprentice" reality show. Also, Diaz was interviewed as a potential Miami U.S. attorney candidate for Trump's administration. Earlier in the race, Diaz deleted a twitter photo of himself with President Trump after he was aggressively trolled online.

Diaz could not be immediately reached to answer questions about when Trump supported him and if he officially endorsed him when he gave him money in state house races.