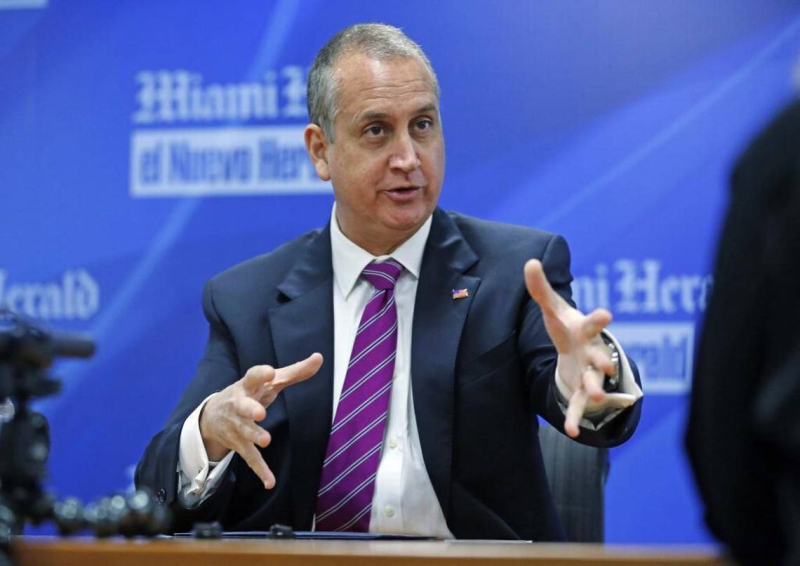 The ban was an amendment tacked on to the annual Department of Agriculture funding bill, and a tie vote would have resulted in the ban failing. Diaz-Balart voted in favor of the ban in 2014 but said the ban “did not yield the positive results that many envisioned and I had hoped for” and voted against the ban the last three years.

The ban on horse slaughter inspector funding passed the House committee in 2014 and 2016 but failed in 2015. The Senate overruled the House’s decision that year.

Horses raised in the United States are not intended to be eaten by humans, but U.S. horses can be transported to other countries and slaughtered for meat according to European Union standards. Horse meat is considered taboo in the United States, but it is eaten in parts of Europe and Asia.

Diaz-Balart argued that U.S. horses are still slaughtered outside the country, where they are not subject to inspections and oversight by the Department of Agriculture.

“The reality is, if these horses are not dealt with in USDA certified and inspected facilities, they will be hauled off to a foreign market where the conditions are much more cruel and less humane,” Diaz-Balart said in a statement. The Government Accountability Office “found that the ban shifted slaughter facilities to other countries, including Mexico, where humane methods and responsible oversight are not as rigorous as those in the U.S. GAO has also observed that there is not enough space in rescue facilities in the U.S. to handle abandoned horses.”

Republicans from western states with large populations of wild horses were the primary opponents of the ban, arguing that current methods of controlling wild horses aren’t enough. Wild horses, which have no natural predators, can disrupt food sources for other animals, but horse advocates say allowing horse slaughter is a handout to ranchers who dislike the horses because they compete with their cattle for food on public range land.

Four Republicans, including Florida Rep. Tom Rooney, voted in favor of the ban, while Texas Democratic Rep. Henry Cuellar was the only Democrat to vote with the Republican majority. The bipartisan amendment was cosponsored by California Democratic Rep. Lucille Roybal-Allard and Pennsylvania Republican Rep. Charlie Dent.

Appropriations Committee member Rep. Debbie Wasserman Schultz, D-Weston, spoke in favor of the ban during Wednesday's markup, arguing that population-control problems for wild horses is not a reason to open the door for horse slaughter.

“The inability to deal with that challenge does not make it okay to leave the door open for the possibility of horse slaughter in the United States of America,” Wasserman Schultz said.

“Those are the steps that we should be taking, not literally holding a machete to the neck of a horse in order to make sure that we can solve a problem that I’m sure in the states where it is an issue needs solving,” Wasserman Schultz said. “We should not do something that most Americans find abhorrent and allow even a step toward the slaughter of horses.”

Roybal-Allard argued that funding horse-slaughter inspectors doesn't have anything to do with controlling wild horses and only serves to benefit ranchers who want to slaughter horse meat for consumption abroad.

“Let me reiterate the fact that this bill does not address the issue of wild horses,” Roybal-Allard said. “It deals only with domestic horses slaughtered for human consumption. Let us not fall victim to the notion that horse slaughter would be humane if somehow done in the United States because no amount of regulation will change the essential nature of a horse and make it a humane practice.”

The Department of Agriculture funding bill still needs pass the House, so there is still a chance the ban on horse slaughter inspections could be reinserted.