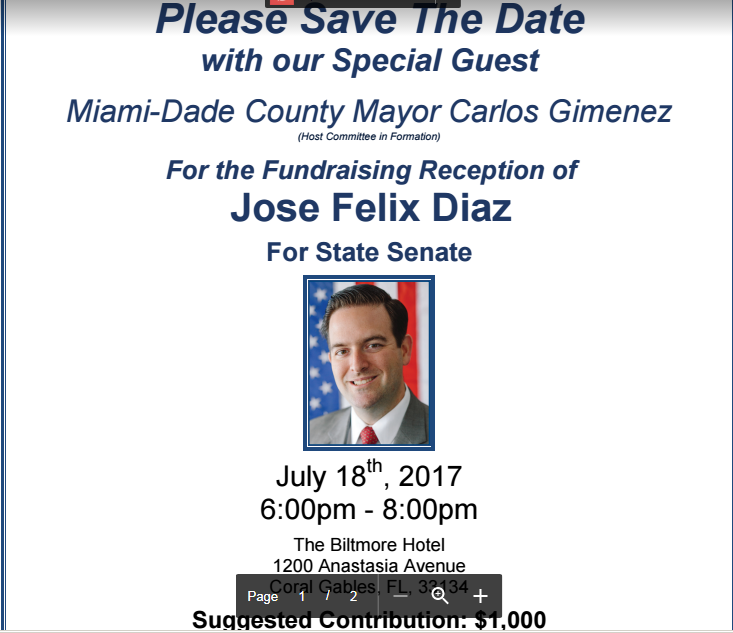 Miami-Dade Mayor Carlos Gimenez has dropped his support for the campaign of State Rep. Jose Felix Diaz over what he says is his disgust with the tenor of the Republican primary for the special Senate District 40 election.

Gimenez spokesman Michael Hernandez told the Herald that the county mayor has withdrawn as the "special guest" of Diaz's July 18 Biltmore event due to back-and-forth attacks between the campaigns of Diaz and former Senator Alex Diaz de la Portilla. Hernandez said Gimenez, who tapped Diaz de la Portilla to help with his underdog 2011 mayoral campaign, will not support any campaign.

"He believes that the tone of that particular race has been unnecessarily negative and will not be endorsing any candidate in that primary," said Hernandez.

Gimenez withdrew his support shortly after the Miami Herald reported Friday on Diaz de la Portilla's 2012 arrest at a Boston hotel over a lit cigarette.

Diaz de la Portilla was arrested at the Intercontinental Hotel and charged with trespassing along with Gimenez's daughter-in-law, Tania Cruz, who is working for the Diaz de la Portilla campaign and is also a long-time friend of the candidate.

Both Diaz de la Portilla and Cruz told the Herald that the incident was a non-event (charges were dropped) but accused the Diaz campaign of leaking the story. Diaz denied any involvement.

Hernandez declined to address whether Gimenez withdrew his support because of the Herald report. Diaz did not respond to a call and text Wednesday night.

The primary election is scheduled for July 25.