« Matt Haggman, who may run for Ileana Ros-Lehtinen's seat, to make "special announcement" on Tuesday | Main | Who will be the next South Florida Water Management district director? »

'Open carry' advocates ask Adam Putnam: Where have you been? 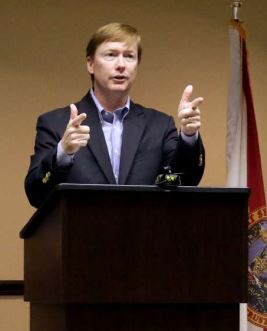 Agriculture Commissioner Adam Putnam is talking a lot about a "pathway" to an open carry gun law in Florida as he chases the Republican nomination for governor, and he proudly calls himself an "NRA sellout" on social media in response to media criticism of pushing a pro-gun agenda.

But his vocal support for an open carry law surprises people who have actually pushed for it in Tallahassee.

"Zero," Gaetz said of Putnam. "He didn't help and he didn't hurt. He played no role in moving the bill. He never called me or approached me about the bill or offered to help."

Gaetz's Senate Bill 300 in the 2016 session would have allowed nearly 2 million people with concealed wepaons licenses to openly carry firearms. At an October 2015 Senate hearing, the witnesses included the NRA, Florida Chamber of Commerce, League of Women Voters, Fraternal Order of Police and Bradford County Sheriff Gordon Smith. Putnam was silent. Around the same time, Gaetz and his son Matt, then a House member and now a congressman, held a press conference with Brevard County Sheriff Wayne Ivey. Putnam wasn't there. "He issued no statement, not even a press release," Gaetz said. "He was not involved."

Putnam's Department of Agriculture and Consumer Services processes concealed weapons license applications. He has been very aggressive about promoting that, including partnerships with county tax collectors who process the paperwork. Putnam's support for the Second Amendment has never been an issue, and he got A-plus ratings from the NRA when he was in Congress. The question is his support for an open carry law.

Steube filed open carry (SB 140) in the 2017 session, and the bill was seven words long. Steube has no recollection of Putnam trying to help pass the bill.

"This is the first I'm hearing of him taking a position on it," Steube told the Times/Herald. Citing Putnam's "pathway" comments, Steube said: "Prior to that, I didn't know what his position was."

Neither Steube not Gaetz is supporting a candidate for governor.

After a speech to the Argus Foundation in Sarasota in January, Putnam was asked by the Herald-Tribune's Zac Anderson about Steube's bill. He said: "I haven't had an opportunity to review Sen. Steube's bill." Three weeks later, Capitol reporters pressed Putnam on the issue at AP's annual session for journalists. His response: "I think it is important for us to have that debate but I think, generally speaking, there are places where you can expand where people carry guns in a safe and effective way."

In a Times/Herald interview, Putnam said: "I've always been a strong supporter of the Second Amendment ... There's no inconsistency at all." He said he recalled meeting with Gaetz a number of times in the 2016 session, "but they were typically on matters related to my legislative agenda and my budget. So I certainly made the best use of time on the issues that were on the top of my list."