U.S. Sen. Marco Rubio is not happy to be featured in new Jose Mallea flier in HD 116 race

In a flier circulating this week, Rubio is featured in photographs with Jose Mallea, the small-business owner. Mallea is running against insurance attorney Daniel Perez in the race to replace Rep. Jose Felix Diaz, R-Miami, who is running for the state Senate.

"Sen. Rubio did not see the mailer before it was sent, and he was never asked to approve the use of his name and picture,'' said Olivia Perez-Cubas, Rubio spokesperson.

Mallea responded in a statement. "I have high admiration and respect for Marco and his family. They have been dear friends for over 20 years,'' he said. "My campaign advertisement highlights my record of service to the Republican Party and I am proud to have served as Marco’s campaign manager during his 2010 U.S. Senate campaign."

“Mallea says he is a friend of Marco Rubio,” the ad says. “But when he had the opportunity to elect one of our own to the White House, Jose Mallea chose to spend millions of dollars in false attack ads against Marco Rubio.”

Mallea told the Miami Herald editorial board he "has immense respect for Sen. Rubio" but that he worked in the George W. Bush campaign and believed Jeb Bush "would make a fantastic president."

Perez and  Mallea have accused each other of dishonesty and invoked their Cuban roots in the bitter primary battle.
Mallea, 40, has used Trump’s recent policy change on Cuba to leverage himself as tougher on the communist country than his opponent, publishing engagement photos from Perez’s recent trip to Havana with his fiancee, a trip Perez defended as being primarily about visiting his fiancee’s elderly uncle. Mallea has called it a betrayal to the exile community.

In a lawsuit filed in Leon County Circuit Court, Mallea has asked the court to rule Perez ineligible to run, citing a Miami Herald article that found Perez does not currently live at the address he listed when running for office.

The Kendall home where Perez receives his mail, is registered to vote and claims homestead exemption on is undergoing major renovation, and it will be for the foreseeable future. In the meantime, the 29-year-old said he is living with his father elsewhere in the district, although he has not disclosed that address to the Miami Herald.

A special primary will be held July 25, followed by a Sept. 26 general election. The Republican victor will face off against newcomer Gabriela Mayaudon, a former Venezuelan legislator. 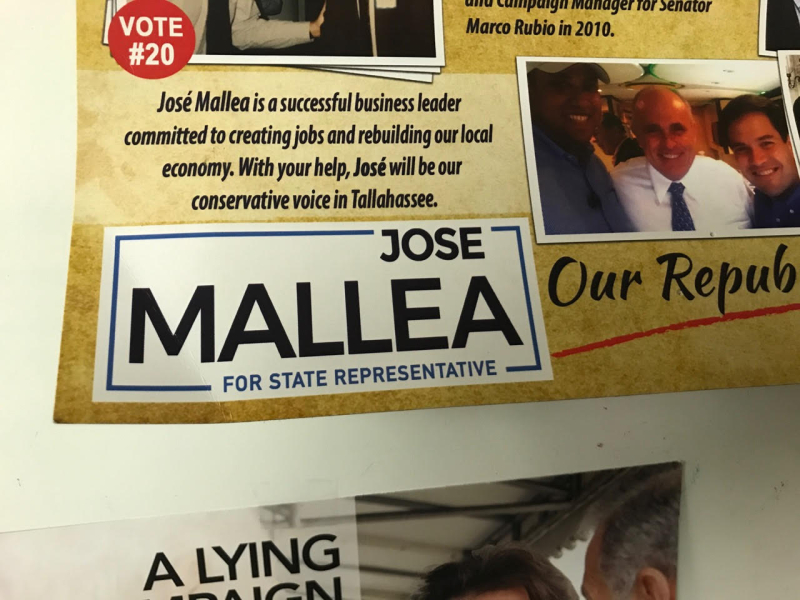