A speeding ticket quota at Florida Highway Patrol? You decide

A top official of the Florida Highway Patrol has told the troopers under his command that they are not writing enough speeding tickets. Maj. Mark Welch of Troop H, based in Tallahassee, said in an email: "The patrol wants to see two citations each hour ... This is not a quota; it is what we are asking you to do to support this important initiative."

The initiative is SOAR, or the Statewide Overtime Action Response program, paid for by taxpayers. State troopers, who are among the lowest-paid in the country, can make extra money working the roads, and part of their job is to deter speeders. 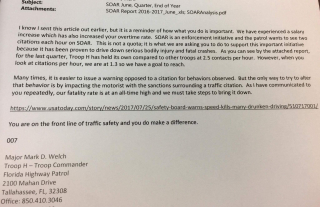 In his email, Welch noted that highway patrol officers recently got a 5 percent pay raise, thanks to the Legislature and Gov. Rick Scott, "which has also increased your overtime rate." North Florida troopers are writing an average of 1.3 tickets per hour in the SOAR program. Welch said that that's not good enough, "so we have a goal to reach."

"Two citations each hour" and "a goal to reach." Does that sound like a ticket quota to you?

Courts have ruled that quotas are illegal if they are tied to employment. Lt. Col. Mike Thomas, a three-decade veteran of FHP, said Welch could have chosen his words more carefully, but he is not imposing a quota.

"It's like a want," Thomas (at right) said. "We're just trying to promote our guys getting out, making the stops, having contact with the 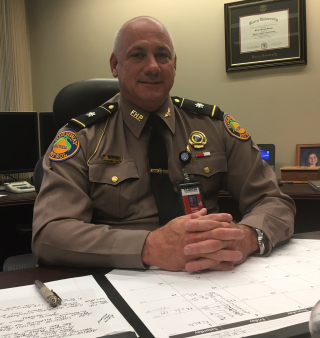 public, educating them, and we do have discretion. No one has ever taken discretion away from a patrol officer."

FHP declined the Times/Herald's requests to interview Maj. Welch. Col. Gene Spaulding, the head of the patrol, is traveling this week and was unavailable.

Most revenue from speeding tickets goes to cities and counties -- not to FHP.

Highway Patrol troopers, the men and women of the "black and tan," pride themselves on their professionalism and their ability to discern in cases where a warning might have just as powerful an effect as a ticket. But Welch said in his email: "The only way to try to alter that behavior is by impacting the motorist with the sanctions surrounding a traffic citation."

William Smith, a veteran highway patrolman and president of the FHP chapter of the Florida PBA, said Welch's email was a quota. "Two tickets per hour? That's a quota, and that's a violation of state statute, period. No ifs, ands or buts," Smith said.

In an April memo, troopers in Miami-Dade who met ticket-writing goals were given an extra weekend off with pay. "Sergeants, please get with these members and schedule their weekend pass." That's wrong, too, Smith said. Thomas said FHP checked out the memo and found no wrongdoing, "but they withdrew that practice," he said.

Traffic fatalities and crashes with serious bodily injury are on the rise in Florida, and even as the state's population grows, the number of licensed drivers is rapidly increasing and tourism reaches record numbers, the number of tickets is on the decline as the patrol continues to struggle with high turnover.

To save lives, the patrol has launched an "Arrive Alive" campaign, a data-driven traffic safety program working with sheriffs and local police departments and focusing attention on "hot spots" where fatal and bodily injury crashes are most common. Thomas said troopers often would rather encourage better driving without writing expensive tickets. "We're pretty public-friendly," he said.