As speaker, Corcoran gets two plum appointments to Citizens' nine-member board that decides insurance rates for homeowners in much of Florida. His choice for one of them was his friend 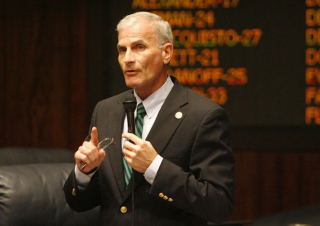 Mike Fasano (pictured), the Pasco tax collector, who as a Republican lawmaker was a persistent thorn in the insurance industry's well-heeled side.

Corcoran wanted Fasano to take the place of Chris Gardner, an Orlando insurance executive and ally of Citizens chief executive Barry Gilway, whose term expired Monday. Fasano was sure to make life miserable for Gilway.

But before Corcoran could appoint Fasano, two Gilway advisers raised a red flag, that because Fasano is an elected constitutional officer, his membership on Citizens' board might violate Florida's ban on dual officeholding by public officials, who can't simultaneously hold two positions with sovereign political power.

"They raised a question of whether that would be an issue," Citizens spokesman Michael Peltier said of Citizens' top lawyer and legislative affairs director. "They said, 'There may be issues here that you may want to take a look at.'"

Peltier said Citizens board members have power to approve assessments -- in effect, taxes -- on most lines of insurance if Citizens' cash surplus is drained after a major storm. But the question is whether a Citizens board membership constitutes an "office," with sovereign power, under the state Constitution.

This issue should have been checked out long ago, but apparently wasn't. A Times/Herald request for a legal opinion turned up nothing Monday. But if Corcoran insisted on appointing Fasano and a court later found that it violated the dual officeholding ban, Fasano could lose his $144,000-a-year tax collector's job. That's too big a risk, but Fasano also doesn't want Citizens blocking him by raising speculative questions.

The obvious solution: ask Attorney General Pam Bondi for an advisory legal opinion. In 2013, Bondi ruled that an elected Aventura city official could also serve on the special district board that runs Tri-Rail, the commuter train in South Florida. Florida's dual officeholding prohibition is nebulous and subject to interpretation and officials often are guided by the Supreme Court's rulings on it.

Corcoran could not be reached Monday. The speaker's office declined to comment. Fasano called the episode "absurd" and said: "Nobody in Tallahassee is challenging Citizens. Nothing has changed. The special interests are still in charge."