« Venezuelan lawmaker tied to Rubio threat: ‘We don’t care about you’ | Main | Bush, Ros-Lehtinen to speak at summit on Iran » 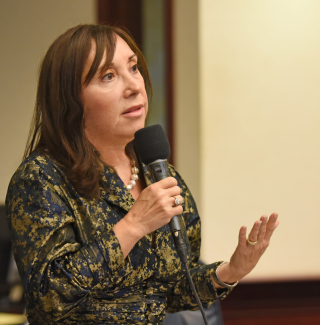 Echoing a request from U.S. Rep. Debbie Wasserman Schultz two days ago, a Democratic lawmaker in Palm Beach County sent a letter to Gov. Rick Scott on Thursday asking for a special session so the Legislature can select a replacement for the statue of a Confederate general that represents Florida in the U.S. Capitol.

The statue of Edmund Kirby Smith is already set to be replaced, but lawmakers failed to agree last spring on whom to replace Smith with.

“With the recent acts of domestic terrorism by white supremacists in Charlottesville, Virginia, it is more imperative than ever that we complete the process we started in 2016 to replace this statue,” state Rep. Lori Berman, D-Lantana, said in a statement that accompanied her letter to Scott.

“There is no place for racism or bigotry in our civil society, and Florida certainly should not be represented in our nation’s Capitol by General Smith. Let’s finish the job and get this done immediately,” she added.

Scott's chief spokesman John Tupps already rejected the possibility of a special session. He told the Herald/Times in response to Wasserman Schultz's request on Tuesday: "The Legislature meets in January, where they can take up this issue, and Governor Scott has no plans to call a special session."