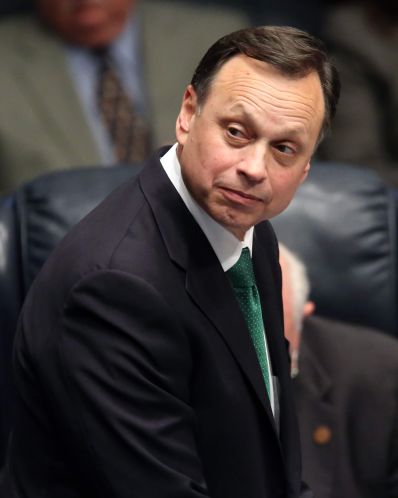 State Sen. Tom Lee, R-Thonotosassa, appears to have stirred a hornet’s nest by announcing publicly that he intends to run for state chief financial officer in 2018.

It’s long been known that Lee wanted to run for the office -- he ran in 2006 -- and he’s made it no secret that he was considering it.

Still, many political insiders expected Lee would eventually decide to run for re-election to his state Senate seat instead of starting a primary fight with the current CFO, Republican Jimmy Patronis. Gov. Rick Scott appointed Patronis to the vacant post in June and solidly backs Patronis to run to hold it in 2018.

But without filing officially, Lee told a local reporter this week he intends to run – and did so on the day before attending a high-profile public event with Scott and Patronis in Brandon.

On Friday, Lee stood with Patronis, Scott and other Republican luminaries at Brandon Honda, while Scott and Patronis touted Scott’s election-year proposal to make it harder for the Legislature to impose tax or fee increases.

Then a reporter asked Scott about the CFO race and about Lee’s announcement, and Scott made it clear where his loyalties are.

“I’ve known Jimmy for a long time,” he said. “I appointed Jimmy because I think he’s going to do a really good job as CFO. I know he’s concerned about whether he’s going to run or not. If he runs I’ll be a big supporter … I’ll do everything I can to see that he wins.”

Patronis hasn’t said whether he intends to run in 2018 to hold onto the CFO post, but he’s acting like a candidate.

He recently founded an independent political committee, Treasure Florida, and Scott will headline a fundraiser for that committee in Orlando in September.

Lee, however, has a substantial head start over Patronis in both statewide name recognition and money – nearly $2 million in his own committee, The Conservative.

Scott, of course, is expected to run for the U.S. Senate next year.

In the past, Lee and Scott have been allies. Scott appointed Lee’s wife, Laurel Lee, to a circuit judgeship in 2013, and Lee took over the Hillsborough County Republican Party, a time-consuming and thankless task, during Scott’s 2014 re-election campaign.

However, the relationship has been less smooth lately. In the 2016 legislative session, Lee opposed Scott’s plans for public school funding, and in the 2017 session, Lee was considered an ally of House Speaker Richard Corcoran, who clashed with Scott over economic incentives.

Lee sought the appointment as CFO, but Scott picked Patronis instead.

Also attending the Brandon event were a couple of the local state House members who’d be interested in running to replace Lee in the Senate if he vacates his District 20 seat to run for CFO, Ross Spano of Dover and Danny Burgess of Zephyrhills.

They and Shawn Harrison, R-Tampa, all said they’d be interested if Lee left the seat vacant.

That means dominoes lined up to fall. If one or more of the GOP House members run, it will set off a scramble in GOP-leaning East Hillsborough to replace them. If Harrison runs, it would open up a House seat in a swing district that could easily go Democratic.