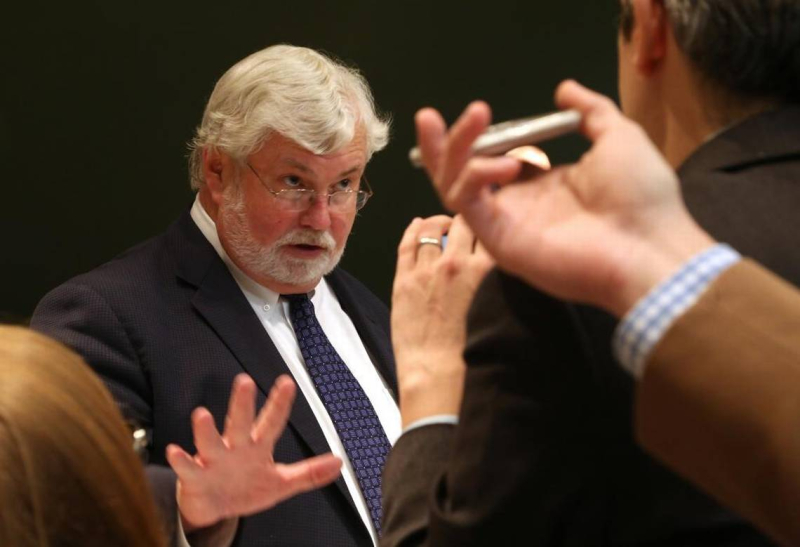 Jack Latvala, Florida’s newest Republican candidate for governor, struggled Wednesday to fully blame the deadly violence that took place during a Charlottesville rally over the weekend on white supremacists.

Latvala formally launched his 2018 bid in Hialeah with a moment of silence for the 32-year-old woman and two state troopers who died in Virginia. But he later declined to lay all responsibility for their deaths on the racist neo-Nazi and Ku Klux Klan groups that staged two days of demonstrations.

“I wasn’t there,” Latvala, a state senator from Clearwater, told reporters. “I condemn all violence of people that are protesting. If people are peacefully exercising their rights — whether they be, you know, white supremacists, or whether they be Black Lives Matter folks — you know, they have a right to demonstrate without having a mob attack them.”

The three dead were “innocent,” he said. Pressed on whether he was equating neo-Nazis with the Black Lives Matter activists, Latvala added: “No, I’m not supporting Nazis.”

Latvala also said he did not see President Donald Trump’s extraordinary news conference Tuesday in which the president appeared to put white supremacists and those who protested them on the same moral plane.

“I’ve been focused on what Jack Latvala’s doing. I don’t know what you’re even talking about,” he said. “I denounced [white supremacists] and all of us — Marco Rubio, Jeb Bush, all of us that look at these things responsibly — denounced it. So, specifically what he said yesterday, I can’t comment unless I saw it.”

Latvala’s Charlottesville exchange with reporters came moments after a campaign-launch speech in which he portrayed himself as the straight-talk candidate.