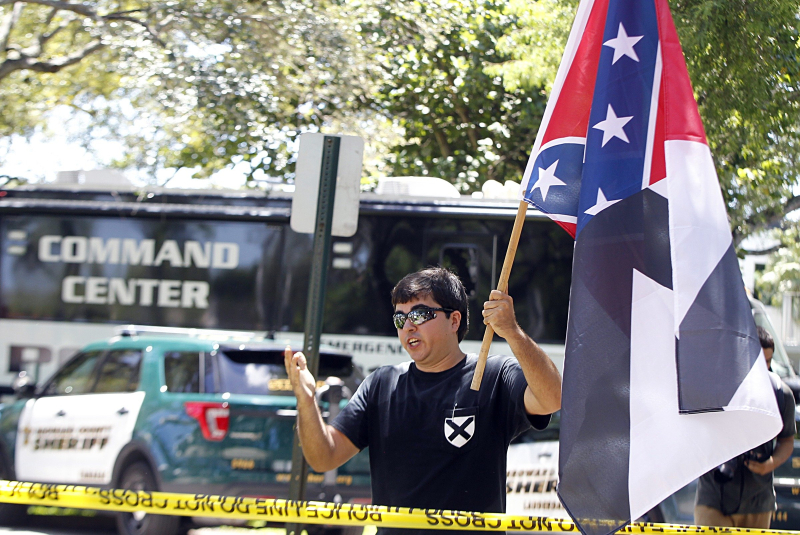 A lone man holding a large Confederate flag was hauled away in handcuffs Wednesday near Hollywood City Hall after he charged — flag first — at demonstrators urging commissioners to rename three local streets, including one honoring a founder of the Ku Klux Klan.

Moments earlier, the man, whom police identified as 22-year-old Christopher Rey Monzon of Hialeah, had engaged in a screaming match against some of the protesters.

“The white man made this country!” he said. “You’re lucky to be here. Florida is my home, and I will defend it.”

At first, he had stood silently by, giving media interviews as protesters holding ”Take Them Down” signs quietly stared at him. A scrum of police officers awaited nearby, ready to defuse any tension.

“These socialists are destroying our history,” he told the Herald, saying the fact that he was the only white nationalist present gave him “stronger resolve.” He gave his name as “Chris Cedeno” and said he was from Hialeah Gardens.

Then, after the shouts, the man broke yellow police tape as he lunged at protesters, said one of them, Cindy Thompson. Police took him down and ripped the flag from his hands. He was later charged with disorderly conduct, aggravated assault and inciting a riot.

“It’s pretty sad we live in a world where this still happens,” Thompson said.

About 150 people had begun gathering under the noontime sun to protest Forrest, Hood and Lee streets, which run through the predominantly black Hollywood neighborhood of Liberia.

Sometime after 4 p.m., commissioners are scheduled to vote on renaming the streets, christened in the 1920s after Gen. Robert E. Lee, who led the Confederate Army; Gen. John Bell Hood, a commander in the Battle of Gettysburg, and Nathan Bedford Forrest, a Confederate lieutenant general said to be the Klan’s first grand wizard.