Putnam, Latvala sound a similar jobs theme, and Scott won't like it 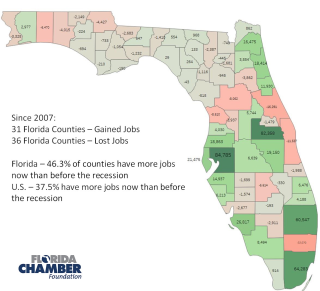 In recent trips to small-town Florida, Republican candidate for governor Adam Putnam and a likely rival, GOP Sen. Jack Latvala of Clearwater, sounded a similar theme: that amid all the boosterism about new jobs, much of the state has been forgotten. The message seemed aimed squarely at Gov. Rick Scott.

Latvala held a "fact-finding" meeting in Blountstown Friday for about 75 local business and political leaders and began by citing a Florida Chamber Foundation report that 36 of 67 counties have lost jobs since 2007, before the Great Recession began (the Times/Herald reported on the numbers). In other words, the economic rebound has bypassed much of the state and rural Florida is in worse shape now than before Scott took office in 2011.

"We need to do a little more focus on the rural counties," said Latvala, joined by Sen. Bill Montford, D-Tallahassee, who represents a number of those counties, including Calhoun, Franklin, Gadsden, Jackson and Liberty, all less than an hour from the state capital.

Speakers complained of short shrift from the state, of being unable to borrow money to grow and of too much red tape in applying for state money, despite a governor who prides himself on repealing burdensome regulations.

Putnam, the agriculture commissioner who walked in the 48th annual Possum Festival parade in Wausau Saturday, told the Times/Herald: "We're not doing enough on workforce development. We're sticking community colleges with a sharp poke in the eye ... Tallahassee just doesn't get it any more."

Putnam said rural economic development has to be a bigger priority. He faulted Enterprise Florida for not meeting with people in small towns where its members "can go see what their struggles are." EFI's Nate Edwards said the agency met in Destin last fall and "we do our best to hold meetings in locations spread across the state." EFI's next meeting will be in Fort Lauderdale.

Scott held a business roundtable Tuesday in one of Florida's most distressed communities, Belle Glade. But when he heralded the arrival of 20 new jobs, it was at a business in Tampa.