« What the 2018 congressional campaign looks like in 2017 | Main | Is competition good for GOP? Tom Lee's says he's in for CFO race, crossing Rick Scott and his hand-picked choice Jimmy Patronis » 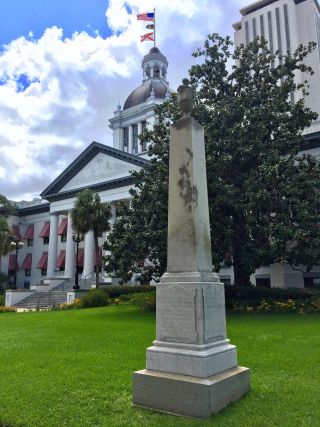 Florida’s Republican governor won’t take a position on what should be done with a monument that honors slain Confederate soldiers on the state Capitol grounds, even as a growing number of elected leaders around the country take steps to remove such monuments after last weekend’s violent white supremacist rallies in Charlottesville, Va.

Rather than lead on the issue, Rick Scott is deferring to state lawmakers and has remained silent on whether such monuments in Florida — and particularly the one at the Capitol — should be taken down.

After Tallahassee Mayor Andrew Gillum, a Democratic candidate for governor, on Wednesday called on Scott to remove the Capitol monument, Scott’s office would only acknowledge they had “received” that request.

His office on Thursday pointed to general remarks Scott had made two days earlier about how federal, state and local officials ought to “review” what should be done with Confederate monuments. “We need to go through a process where everyone comes together and has a legitimate conversation, then we go forward,” Scott had said.

But Scott, through his spokesmen, has repeatedly declined to answer questions from the Herald/Times this week — including again on Friday — about what direction he wants elected officials in Florida to take: Whether monuments celebrating the Confederacy, such as the one at the Capitol, should be removed or kept, and why.