« Could Daisy Baez lose her House seat because of where her house is? | Main | Ron DeSantis ties himself to Donald Trump as he weighs gubernatorial run » 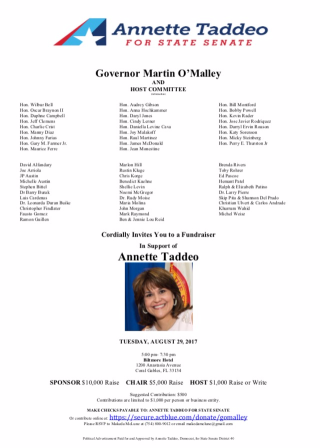 O'Malley dropped out of the 2016 race after a poor showing in the Iowa caucuses, but he may still have future presidential ambitions -- which explains why he's trying to be helpful to a Democrat in swing-state Florida.

Also hosting the reception are a slew of state and local elected Democrats, activists, attorneys and donors, according to an invitation obtained by the Miami Herald.

Republicans expect to spend $3 million in the expensive race to replace former Sen. Frank Artiles, a Republican who resigned in scandal in April.