An ideal venue for DeSantis to enter governor's race? Not so fast 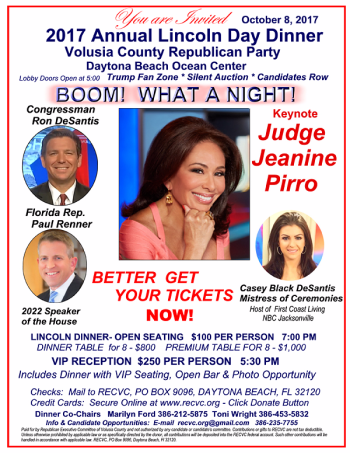 On paper, it looks like a fitting venue for U.S. Rep. Ron DeSantis to declare his intentions to seek the Republican nomination for governor. It’s the Volusia County Republican Party’s annual Lincoln Day Dinner on Sunday, Oct. 8, in Daytona Beach.

Not so fast, says Brad Herold, a DeSantis spokesman. Herold said “late October or early November” is a likely time window for DeSantis to declare his candidacy, adding that the congressman is “very seriously” looking at running, but “he has not fully made a decision yet. It‘s probably a month away.”

Herold said DeSantis has to make up his mind that there’s room for a real “constitutional conservative” in the race. “If he got in, he would be the conservative in the race,” he said.