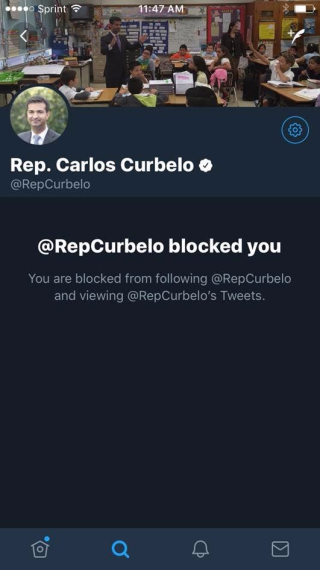 Curbelo has blocked at least seven Democratic Congressional Campaign Committee staffers from his official or personal accounts, according to DCCC spokesman Cole Leiter. This comes after local progressive activist Tomas Kennedy was blocked by Curbelo's personal account in August after pointing out that the second-term congressman does not live in Florida's 26th district. Curbelo lived in the 26th district until the lines were redrawn in 2015 and members of Congress are not required to live in the districts they represent.

.@RepCurbelo blocked me and possibly deleted his tweet when called out about not living in CD26, the district he claims to represent. pic.twitter.com/Lg2oai4Qnr

Leiter said that none of the seven accounts that were blocked are Curbelo's South Florida constituents.

Curbelo's office did not immediately respond to a request for comment.

Trump is also the subject of a lawsuit by Knight First Amendment Institute at Columbia University over blocking people on Twitter. This week, Trump admitted that he blocks people on Twitter as part of a process in the lawsuit where both sides agree to a set of facts.

Alice Visocchi, a researcher with the DCCC, was blocked by Curbelo after asking him a sarcastic question about his vote in favor of the American Health Care Act, which repealed parts of Obamacare. 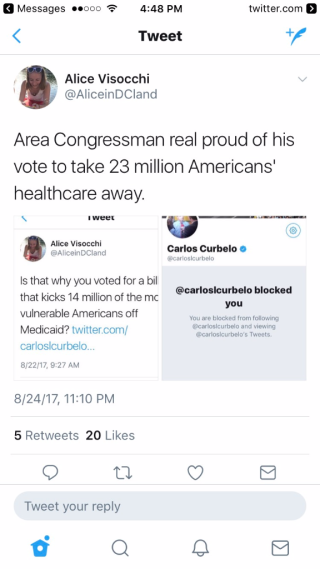 Curbelo's personal account, @carloscurbelo, is mostly links to news articles and his work as a member of Congress. His official account, @repcurbelo, includes information that assists constituents. On Thursday, his official account included an office phone number so that constituents recovering from Hurricane Irma could receive assistance in applying for a Small Business Administration loan.

If you need assistance applying for an @SBAgov loan, my staff stands ready to assist you. Call our office at 305-222-0160 #KeysRecovery https://t.co/SHiMlSmRdt

Democrat Debbie Mucarsel-Powell is running against Curbelo in a Miami-to-Key West district that is one of the most Democratic-leaning in the country to be currently represented by a Republican.