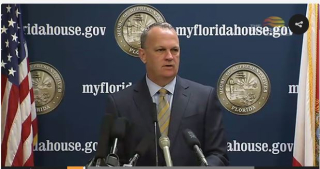 Corcoran announced formation of the 21-member panel, chaired by Rep. Jeannette Nuñez, R-Miami. It includes 14 Republicans and seven Democrats, most of them from counties hit hardest by the storm.

Corcoran, a free-market conservative who supports less regulation -- especially in health care -- floated ideas that would invite more regulation, such as underground utilities or forcing fuel companies to store reserves of fuel to get to gas stations more quickly.

Corcoran forged a newfound alliance with Gov. Rick Scott last spring. But picking apart the state’s preparation and response to Irma could be seen as a criticism of Scott’s leadership. Moreover, Republicans could find themselves in the unaccustomed role of supporting an activist government in regulating private businesses, such as utilities and nursing homes (both of which have been loyal supporters of the Republican Party).

“We know now, after this catastrophic storm, that gas wasn‘t readily accessible,” Corcoran told Capitol reporters. “Why does a state in the richest country in the world -- third-largest -- why don’t we have a significant gas reserve in the central part of the state?”

He added: “What we should be doing is asking ourselves, what can we do to protect the people of this state in the best way possible? That‘s what this committee exists for.”

Asked if he personally supports Scott’s emergency rule to require nursing homes to install generators within 60 days, Corcoran wavered. “I think that’s up to the committee,” he said. “But you can solve all of that in many different ways,” suggesting stiffer fines or increased transparency.

Corcoran also suggested that the House and Senate consider putting at least $638 million into recovery efforts next year, the amount of what he called “pork projects” in the current budget.

Negron told the Times/Herald that the Senate rejects Corcoran’s call for a moratorium on member-sponsored spending projects.

“Senators are out in their communities. They‘re in the best position to know what projects are most important,” he said. “Let’s keep our constitutional roles straight. The Legislature is the appropriating body. The Legislature should always have the prerogative and flexibility to write the budget.”

“This should not become a backdoor attempt to weaken existing regulations,” Cruz said. “If Irma has taught us anything, it is that we need to modernize and strengthen regulations that protect every Floridian in times of natural disasters.”