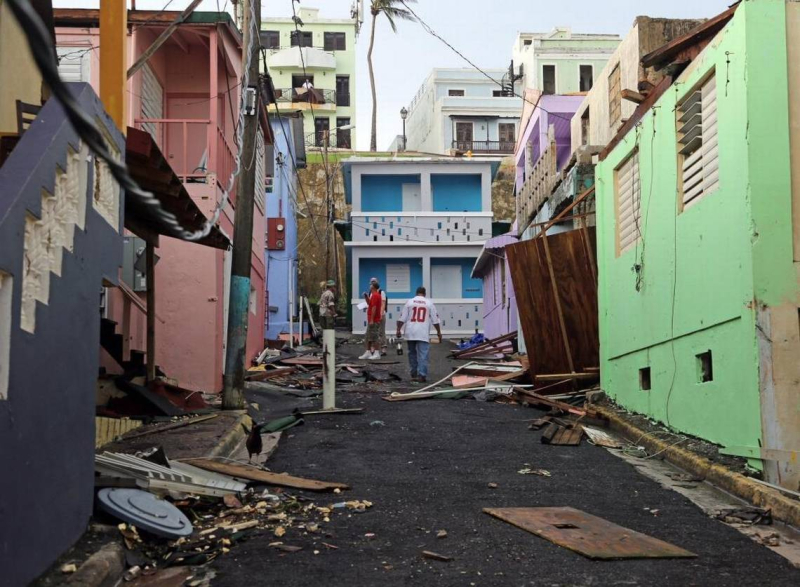 Rep. Nydia Velázquez, a New York Democrat and one of the longest-serving Puerto Ricans in Congress, nearly broke down in tears as she responded to Trump’s tweet that Puerto Rico was in “deep trouble” and burdened with debt after Hurricane Maria.

Texas & Florida are doing great but Puerto Rico, which was already suffering from broken infrastructure & massive debt, is in deep trouble..

...It's old electrical grid, which was in terrible shape, was devastated. Much of the Island was destroyed, with billions of dollars....

...owed to Wall Street and the banks which, sadly, must be dealt with. Food, water and medical are top priorities - and doing well. #FEMA

After 11 seconds of silence, during which Velázquez was consoled by Rep. Yvette Clarke of New York, she tore into the president’s first series of tweets on Puerto Rico that came after Trump spent days blasting the National Football League.

“I feel offended and insulted to see a type of tweet from the president blaming the people of Puerto Rico for a natural disaster and then the public debt,” Velázquez said. “We are better than that and I expect more from our president. Right now this is a matter of life and death.”

Democrats on Tuesday had a clear message for the Trump administration nearly one week after Hurricane Maria tore through Puerto Rico and the U.S. Virgin Islands: Appoint a general and send in the troops.

“We’re looking for a more robust response,” said Democratic Caucus chairman Rep. Joe Crowley. “We need a general to be put in place. We know that (former Homeland Security) secretary (John) Kelly knows these islands like no one else. He understands the structure of them, he knows how to get equipment into them. But we need to see that overwhelming response.”

Crowley and other Democrats aren’t pleased with the White House’s response to Puerto Rico and the U.S. Virgin Islands so far, citing logistical snafus like a medical ship intended for Puerto Rico that is still docked in Norfolk, Virginia.

“Unfortunately, what we‘ve seen from the White House over the weekend has been a diversion, a distraction to nonsensical issues,” Crowley said.

Clarke cautioned that Hurricanes Maria and Irma could be Trump’s Hurricane Katrina, a reference to the 2005 storm that killed hundreds in Louisiana after the federal government botched relief efforts.

“I recognize and recall with horror what happened with Hurricane Katrina,” Clarke said. “This is Katrina times six and we have got to really make sure the U.S. government uses everything at its disposal to move into that region and begin to employ life-saving measures.”

The need for military intervention in the U.S. territories is particularly important according to Clarke because there were six major islands that were devastated by the two hurricanes, meaning an insufficient federal response will lead to six Katrina-like situations.

“That means that each island has been decimated,” Clarke said. “People speak of Puerto Rico and they speak of the main island but there are two other islands. Likewise, with the Virgin Islands you have St. Thomas, St. John and St. Croix.”