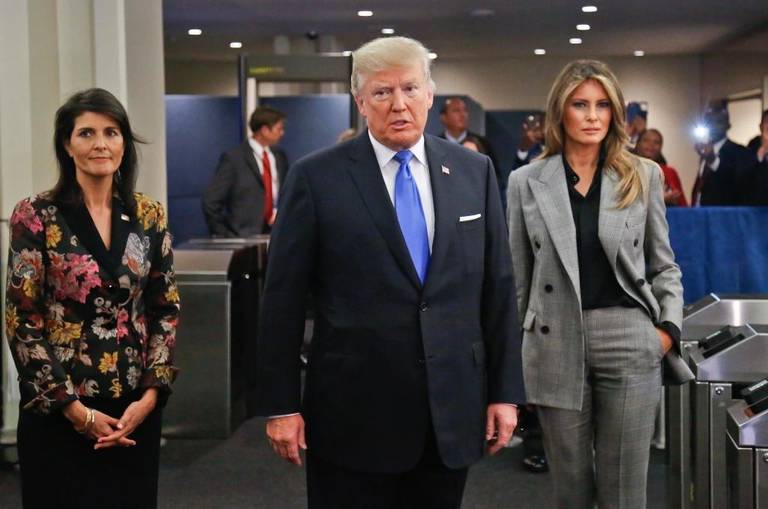 President Donald Trump threatened “further action” against Venezuela on Tuesday and promised not to lift sanctions against Cuba until the government in Havana makes fundamental reforms.

“We cannot stand by and watch,” Trump told world leaders gathered at the United Nations.

In a speech that moved quickly from criticism of America’s adversaries to dire warnings of nuclear war, Trump turned his attention briefly to communism, singling out Venezuela and Cuba for, he said, delivering only “anguish and failure” to its people.

He called on world leaders to do more to help the people of Venezuela and not look the other way as their government destroys democratic institutions.

“I ask every country represented here today to be prepared to do more to address this very real crisis,” Trump said. “We call for the full restoration of democracy and political freedoms in Venezuela. The problem in Venezuela is not that socialism has been poorly implemented, but that socialism has been faithfully implemented.”
Trump was interrupted by a smattering of applause throughout the 40-minute speech. The clapping was loud and unified when he spoke of supporting the people of Venezuela, but was punctuated with pockets of silence when he blamed socialism.

The Trump administration has been ratcheting up the pressure on Caracas since Venezuelan President Nicolás Maduro engineered a vote for a new constituent assembly that stripped democratically elected lawmakers of their power. Maduro has been the administration’s main target as he has led the once-mighty nation sitting on the world’s largest oil reserves as it has plummeted into a deepening economic crisis amid rising inflation. In recent months, anti-government demonstrations have broken out daily as desperate citizens take to the streets to protest the lack of even the most basic goods.

“This corrupt regime destroyed a prosperous nation by imposing a failed ideology that has produced poverty and misery everywhere it has been tried,” Trump said.

Trump “pretends to rule the world, but does not even rule his own country,” Arreaza told reporters in New York after the speech.

Unsatisfied with the international response to Venezuela, the White House is using the United Nations General Assembly to build and strengthen an international coalition of support against Caracas. Trump’s speech was an expansion of concerns he raised Monday night during a dinner with Latin American Presidents Michel Temer of Brazil, Juan Manuel Santos of Colombia and Juan Carlos Varela of Panama as well as Argentinian Vice President Gabriela Michetti.

He reminded them of their trade relationships, which he called a “critical foundation for advancing peace and prosperity” among neighbors.

“Was one of the wealthiest countries in the world for a long period of time,” Trump told the group on Monday. “The people are starving and the country is collapsing. You didn't think that was possible. Their democratic institutions are being destroyed....Our goal must be to help them and restore their democracy.”

The leaders of the four countries were among 12 Latin American nations who signed a joint declaration in Lima last month, condemning the “breakdown of democratic order” in Venezuela and said they would not recognize any action taken by its “illegitimate” new constituent assembly.